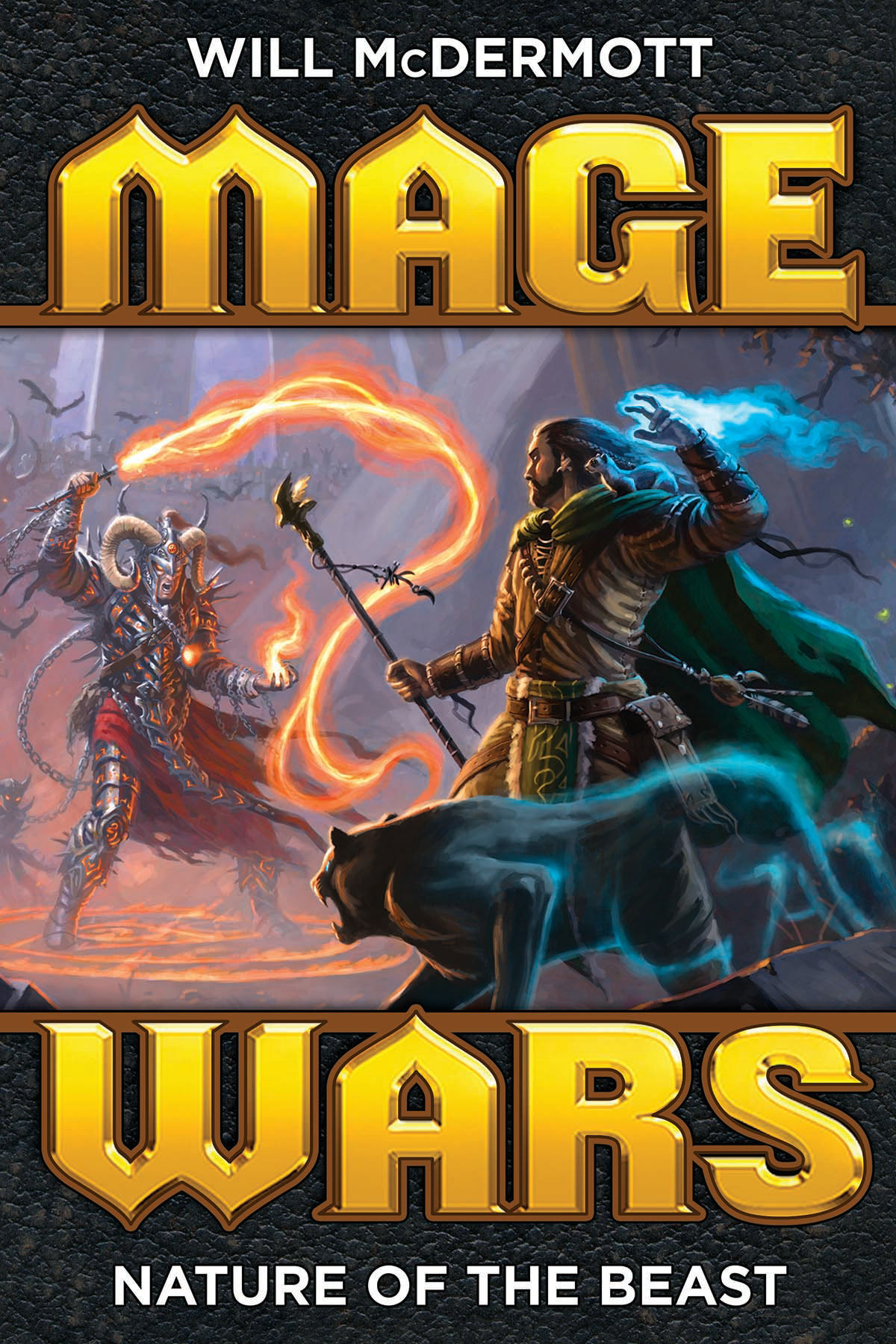 Dynamite Entertainment is proud to announce a new licensing agreement with Arcane Wonders for multiple product categories based on Mage Wars, the bestselling and critically acclaimed tabletop fantasy game. Dynamite will debut their first Mage Wars project in January 2015, an original prose novel subtitled Nature of the Beast. Written by Will McDermott, Mage Wars: Nature of the Beast is the first official prose story set within the expansive world of the game. Following the January print and digital launch, Dynamite plans to expand the line into comic books, graphic novels, additional prose novels, prints, lithographs, and an art book.

Mage Wars is the customizable strategy game of dueling mages. Players take on the role of powerful mages, stepping into an arena to battle for supremacy. A unique genre-breaking concept, Mage Wars combines the best elements of customizable card games and tactical miniature games. Players can choose from multiple mages like the Wizard, Warlock, Beastmaster, Priestess, or many others, each with their own unique strategies and style of play. The game is fast-paced and exciting, with challenging decisions every turn. Since its debut in 2012, the game achieved critical success and has accrued dozens of industry accolades. Tom Vasel of Dice Tower, a leading podcaster and reviewer in the gaming community, ranked Mage Wars as the Second Best Game of All Time in his “Top 100 Games of All Time” list.
“We are truly honored and excited to be working with Dynamite. To partner up with such a professional team to bring Mage Wars and the world of Etheria to our fans is a dream come true,” cheers Bryan Pope, President of Arcane Wonders. “We have worked so hard to develop each of these characters and this universe and look forward to this partnership to share our vision with our fans.”
“Since its launch, the Mage Wars game has been celebrated by critics and fans alike, a true sensation in the gaming world,” says Nick Barrucci, the CEO and Publisher of Dynamite Entertainment. “It’s a great privilege and honor to sign with Arcane Wonders, a true innovator in game design. They’ve created a fantastic universe to explore, and we’re proud to work hand-in-hand with their staff in building upon that expansive landscape with new creative content.”
The first novel, Mage Wars: Nature of the Beast, takes place in the world of Etheria, and follows an unlikely cast of characters refreshingly removed from the trappings of traditional fantasy adventure. “Nature of the Beast is not your average Hero’s Journey tale” says author Will McDermott. “This is the story about the other guys — the loners and the outcasts, the guards and the stewards, the folks who normally stay behind when the adventure starts — the forgotten characters. It is a journey not toward the light, but into the darkness, both literal and figurative, where these characters must face their foibles and fears, their painful pasts and their lonely lives. It is a story about how true heroes are born, not through trial by fire, but by forging friendships that help them discover their own inner strength.”
Author Will McDermott has worked in the gaming industry since 1997, when he became Senior Editor of Duelist Magazine at Wizards of the Coast. While at Wizards, he helped publish thirty-seven magazines, and wrote five strategy guides for trading-card games. After leaving Wizards of the Coast, he became a freelance writer. Over the next five years, he published two Magic: The Gathering novels, three Necromunda novels (set in the Warhammer 30K universe), and numerous short stories. In 2006, McDermott joined the writing staff at ArenaNet and began working on Guild Wars. He wrote character dialogue for Guild Wars: Nightfall, Guild Wars: Eye of the North, and Guild Wars 2. He also shepherded the first two Guild Wars novels (Ghosts of Ascalon by Matt Forbeck and Jeff Grubb, and Edge of Destiny by J. Robert King) from conception to publication. Since departing ArenaNet in 2010, McDermott worked with Nintendo in game development and returned to freelance writing.
The development of the Mage Wars: Nature of the Beast novel follows upon Dynamite’s success in prose publishing with such titles as Seal Team Six (which has sold over 140,000 copies across its nine volumes) and Prince Dracula. Upon its release in January 2015, the prose novel will be available in print at fine bookstores and hobby specialty shops everywhere, and digitally for consumer purchase through Amazon, Kindle, iTunes, Kobo, and Google Play.
Please follow and like us: