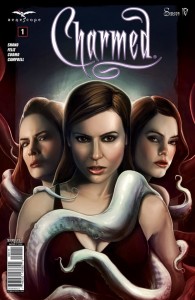 In this brand new season, the Halliwell sisters are just beginning to come to terms with the strange resurrection of their long-dead sister Prue… when a new threat rises up in the form of the Old Ones! With this new season, Zenescope takes CHARMED back to its darker roots, while keeping up the comedy that fans loved in the latter seasons.

This is the official (okay, it’s not… but it really should be) catch phrase that’s kept Charmed in the hearts and minds of it’s loyal fan base. In an outstanding play, the show, which I admittedly didn’t watch a lot of, tipped old gender tropes on their misogynistic ears. The men-folk mind the homestead and take of the youngsters while the women are out vanquishing the forces of evil. Coming out a year after the first season of Buffy the Vampire Slayer (which I admittedly did in fact watch the HELL out of) it’s tough to say how much one might have had to do with the other. What is pretty plain is that whatever there was in that particular formula, it worked.

And given that there has been enough continued buzz about the TV series, no doubt kept alive at least in part by cable syndication- to prompt an ongoing monthly comic that picks up where the show left off – I’d have to say that it still works.

The Halliwell sisters – Paige, Piper, and Phoebe – are still picking up the pieces of what happened in the shows finale. They’re living their lives in the old Halliwell homestead, adjusting to the death and apparent reincarnation of the fourth sister, Prue, and still dealing with the occasional demonic attack. As if that weren’t enough to handle, there’s an upcoming wedding to be catered, diapers to be changed, and lives to be lived. It’s all handled with the poise and grace of a heroine from a Harlequin Romance novel.

I don’t say that as a diss, honest. This is the tone set by the TV show, and the fact that the writers took up the challenge of transferring that feel into a comic is a good thing. It might be a bit of a task to keep up, but so far as I can tell all of the elements are intact. Hopefully, the built in fan following that already exists from the show will encourage a new generation of Charmophiles.

In all honesty, I have to wish this undertaking luck. With the loss of so many shows that I would have loved to see kept going- the aforementioned Buffy, Firefly/Serenity, and Almost Human (thanks a lot, Fox) to name a few- the comic book medium is a blessing. All that’s really needed is an honest desire to take what went before and build on it. Treat it right, fan the flames, and the fans will show their love.

If you write it (well), they will come.