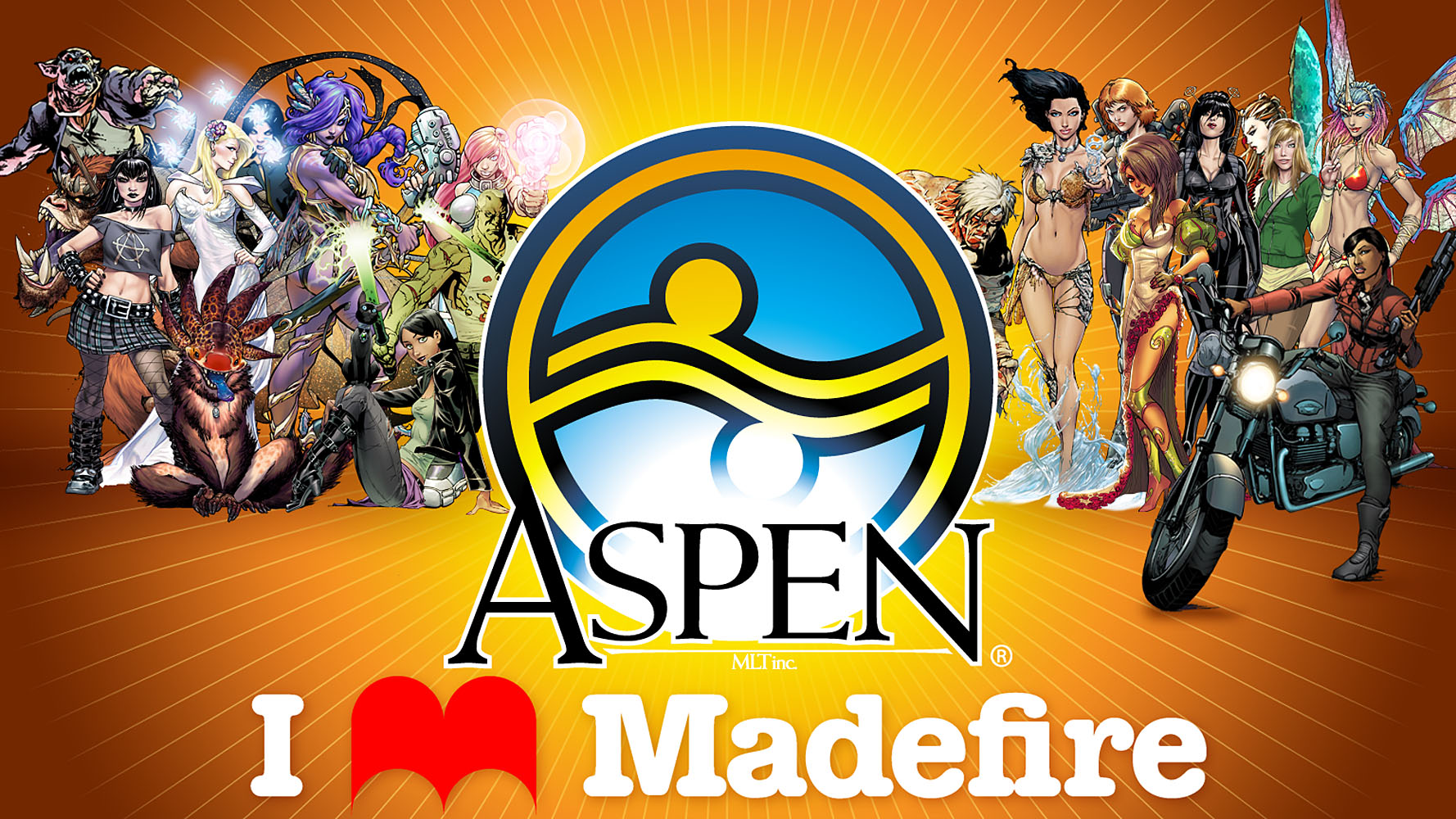 Aspen Comics is pleased to announce the launch of over 350 new and classic titles from the publisher’s digital library available starting on October 23 on Madefire. Madefire delivers Motion Books, an interactive audio-visual reading format that combines art and sound for a new style of digital storytelling. The new titles will be available on both the Madefire iOS and Android apps for tablets and smartphones. Madefire Motion Books & Comics has been a 5-star rated app since launch and recently recognized in the iOS App Store as an Editors’ Pick, Best New Apps and Best of July (2014).

“Mike Turner was all too briefly – a towering giant in the comics industry. But he left us a legacy with his Aspen imprint that Madefire is delighted to be able to share,” said Liam Sharp, co-founder and CCO, Madefire. “As with Aspen, Madefire is a company founded on the back of great creators – which makes this a very natural fit!”

The Madefire Motion Book Tool was also recently launched to the public in July and has been continuously developed with the creator in mind. Taking static art a step further by incorporating movement, sound and depth to visual reading, the platform continues to push the limits in digital storytelling. New features have been introduced to allow for a more streamlined creative process like creating covers with a click of a button and animating art in a few simple steps. Publishing to the web has never been easier and can take as little as 5 minutes. The ease of sharing your story on a website or blog is also more fluid now with an embed code automatically created when the book is published, giving the creator control of where and how their story is told.

The first wave of Aspen Comics’ books on Madefire will cover a large variety of titles including Michael Turner’s Fathom and Soulfire, Executive Assistant: Iris, Lola XOXO in addition to a majority of the publisher’s past library of books. New releases such as Aspen’s upcoming The ZooHunters will also be available day and date on November 5. Aspen Comics plans to include titles from their all-new Big Dog Ink imprint soon as well.

Founded in 2011 by Ben Wolstenholme, Liam Sharp and Eugene Walden, Madefire is a media and technology company. Madefire has built the Motion Books publishing platform that provides artists, writers and publishers tools for creating a new reading format called Motion Books. Madefire is backed by Toni Schneider at True Ventures, The former CEO of Automattic, makers of WordPress, as well as Bill Woodward (Anthem Ventures, former Chairman of Macromedia). The Advisory Board also includes industry leaders Mike McCue, CEO and Founder of Flipboard, angel investor Sina Tamaddon, former Senior Vice President of Applications for Apple Inc, Dave Gibbons, co-creator of Watchmen, the bestselling graphic novel of all time, and Bill Sienkiewicz, widely recognized as one of the greatest innovators of sequential art. For more information go to madefire.com.

Aspen MLT, Inc. is an entertainment publishing company founded in January 2003 by superstar comic artist Michael Turner. Priding itself on producing entertainment properties of the highest quality visual and storytelling elements Along with their own successful properties such as Fathom, Soulfire, Executive Assistant: Iris, Charismagic, Lola XOXO, BubbleGun and more. Aspen also collaborates with the comic industry’s most successful companies and endeavors including Marvel Comics and DC Entertainment. Aspen has collaborated with Marvel for various hit projects, including cover work for the best-selling events Civil War, World War Hulk, and Ultimatum. Aspen collaborated with DC Comics to provide covers for such best-selling titles as Superman/Batman: The Return of Supergirl, The Justice League of America, and Eisner-nominated covers for the critically acclaimed, best-selling Identity Crisis series. In 2006, Aspen joined forces with television giant NBC to create the online comic adaptations for the hit television series Heroes. In 2012, Aspen teamed up with Gale Anne Hurd’s Valhalla Entertainment to produce the horror-adventure series Dead Man’s Run, as well as collaborating with director McG’s Wonderland Sound and Vision to produce the horror comic Haunted City. Aspen also produced the one-of-a-kind Anarchy digital graphic novel for the popular body spray company, Axe. Recently, Aspen celebrated their tenth anniversary in the industry with their successful and best-selling “10 for 10” initiative.