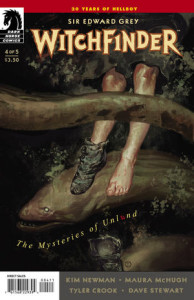 In a struggle with the local police, the witchfinder is taken down, but before they can drown him in the rising waters, a strange fish woman takes him in and reveals the mystery of Unland.

* From the pages of Hellboy!

This one was kinda cool… The Witchfinder is Sir Edward Grey, and the series follows his adventures as he roots out evil in all its forms. This series brings Sir Edward to the town of Hallam in his investigation of a mysterious death. The town, being extra provincial and closed off by surrounding wetlands, is full of secrets and short on trust for strangers.

The dialogue here was sort of a treat… all old school English, you can almost hear the brogue and the tripping “R’s”. The artwork fits nicely, with a no nonsense approach that takes nothing away from the themes. This being another offshoot from Mike Mignola’s Hellboy series, the look and feel do a great job of keeping a sense of continuity with what’s come before. Minimalist backgrounds add to the isolation the story as well.

As our story picks up, Sir Edward is attacked by one of the local constabulary, who it turns out is a monstrous eel person. It dawns on Sir Edward that maybe the local officials are doing their best to stop his investigations in their community. He wasn’t knighted by the hand of the Queen because he was dense and slow on the uptake…

There’s a time shift, jumping back 38 years to a place called “Unland”. A father and his son, a curious lad by the name of “Hallam”, are crossing the marsh in a boat. I becomes clear that Hallam and his family are tied up in Sir Edward’s future case, as the story moves back and forth between the two periods. Hallam’s mother knows something that his blustery and closed minded father does not (wow, stereotype much? As a blustery and closed minded man, I might’ve been offended, but even I had to admit that Hallam’s Dad was kind of a jerk). While Mom honors the “old ways”, Dad is caught up in more modern marvels like steam ships and suspension bridges.

This being the tail end of a five part story arc, issue 4 leaves us in the moment where, if this were an old fashioned movie serial or radio program, we’d get the dramatic “Dun dun duunnnnnnn” as the orchestra closes the scene. Plenty to be had here, for the fans of Mignola, Hellboy, and the BPRD, as well as anyone who enjoys a bit of supernatural period drama.