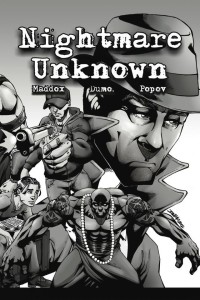 Writer James Maddox (The Dead, Clown, The Horror Show) and Illustrator Rob Dumo. (The Eccentrix, Robyn Hood) take a trip into surreal, science-fiction noir with a strange being who holds the key to human evolution.

Lou has been around since the dawn of existence, and when he sleeps, humanity tends to get smarter. Through the many years, Lou has fallen prey to two groups: one wants to cut him up, while the other wants to put him to sleep forever – then a third party takes him for ransom.

Now presented digitally, this psychological action tale has been turning readers into fans since its original print publication from Broken Icon Comics.

Lou is an ordinary, everyday sort of fella. He walks the streets wondering if he’s done right, he questions whether or not he’s made a difference one way or the other, he drinks a lot of coffee, and he’s immortal. Not just that, but it turns out that whenever Lou sleeps, humanity makes leaps forward. No pressure there, huh?

Lou has no idea of where he came from, what his true nature is, or what it all means. His earliest memory is one of pain, as he wakes up with no idea of where he is. He’s got a broken leg, and is being tended to by a primitive woman who has no comprehension of how to help. Lou dozes off and when he wakes up, the girl is still there… but now she’s talking, binding his wounds, fashioning a splint and a crutch out of sticks and vines, even putting aloe to his injuries to ease the pain.

This cycle goes on over the course of centuries. Lou wanders, doing what he can to keep himself awake because while he’s seen the advancement of humanity, he hasn’t seen anything to indicate that such advancement has been a good thing.  Two factions are after Lou: The Factory wants to open Lou up and see what’s going on in there, and The Crypt wants to entomb him forever, keeping him asleep so that the human race can reach its full potential unhindered.

This is an interesting book, with pretty cool concept that gets pulled off nicely. The writing moves us along, and if there are a few leaps in logic that jump us to a point a little quicker than we might have liked, it’s forgivable. I also liked the artwork quite a bit. It gives us a no frills look at Lou and his world, with enough detail to make it all pop. Overall, a pretty clever little creation that should definitely see the light of day. Take a look.