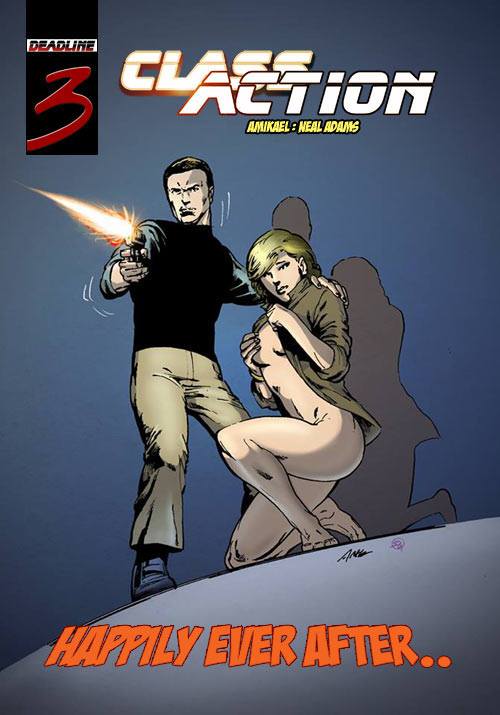 Class Action #1 (Deadline Press – Adams / Bergkvist) Happily ever after – Sarah Wesson has no clue that her husband to be is the worlds first and foremost super villain, pardoned for reasons unknown.

This zippy little title actually has a lot going for it. First and foremost, I have to say that I really like the artwork on it. It’s a black and white comic, with solid inking and good lines. The action flows along pretty well, and there isn’t too much clutter in the panels.

The writing… and I want you to stay with me now… has some rough spots. There’s something about the dialogue that seemed a little broken up. I think it was the lack of contractions. Okay, I know it sounds picky, but people use contractions, and natural dialogue generally follows suit. That said, most writers will tell you that without a doubt, dialogue is some of the toughest writing to do. There’s a (maybe) heavy handed use of quips and one-liners, but that’s not too tough to get past, so I’m really not dissing the book on that basis… Some people really like quips.

The story starts us out with John Smith (stop snickering, I’m sure there are plenty of real people named “John Smith” in the world) at odds with a band of thugs. He dispatches them handily and with style.

During the fight, he learns that the attack had something with his upcoming marriage to fiancée Sarah Wesson. Smith surmises that if the attack on him was to stop their marriage (leap of faith, but sure why not?), then they might be after her next.  We move on to meet Sam Deacons, the villain of this piece, and a villain he is. His plan is to stop the marriage between Smith and Sarah, to claim her as his own, to oust Sarah’s father, Paul Wesson, as the CEO/owner of “Carbonite, Inc”, and to take over the company. Whew… this guy really has aspirations to be a Bond villain…

The fight is taken to the Wesson estate, where it turns out that none of the proposed victims (Sarah, her father, or the butler) are helpless in the least. Evil is overcome, with a quip and a well-placed swing of a sword (yup, the book even fits in a sword fight).

Now, let me tell you how this title caught my eye… The writing credit for Neal Adams. I did some digging, and it sure looks like this is THAT Neal Adams. Some of the pencils in the book looked like Mr. Adams’s work as well, so this title isn’t as big a long shot as you might think at first glance. This could very well be one of those “diamonds in the rough” that people talk about. Give it a look and you might find something in here to draw you into the series.