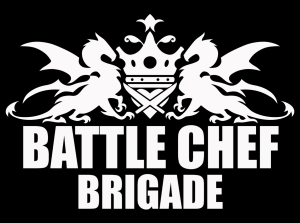 “Play as a magical chef! Hunt monsters and cook them into exquisite dishes to wow the judges and crush your opponents!”

Let me start by saying that there is nothing that doesn’t seem awesome about Battle Chef Brigade. It’s an action-centric game where you play a sort of hunter/mage “chef” that ventures out to retrieve their own ingredients and then use your unique skills to both acquire the best materials and create the best dish for a panel of judges with varying tastes. It’s a great premise, but let’s talk about some of the things that genuinely sets BCB apart and makes it a “must have” game.

Hunting: In addition to each character having their own abilities and upgrades, the monsters are actually part of an ecosystem that your actions have sway over. In the example given on their Kickstarter page, “You can feed the birds to get more eggs, but letting the other monsters snack on them might be very dangerous.”

Cooking: While the specific mechanics of how you go about achieving culinary greatness are still a little hazy (take a look at their Kickstarter video for screenshots that should give a rough idea of how it works) the details that have been revealed about the ancillary systems to the cooking mechanism make it obvious that this is going to be a very fun aspect of game-play. The reliance on creativity implies it to be a very open-ended system, and the usage of spells is a very cool way to tie in the fantasy element.

Playable Characters: At present, there are 3 playable characters of 6 revealed – the success of the Kickstarter potentially allowing for more to become playable earlier on (possibly at launch, it’s not clear, but given how cool they are – let’s hope for the best). As your characters level up, you’ll be able to acquire new spells, as well as new cooking equipment. RPG elements? I’m sold!

Get over to the Battle Chef Brigade Kickstarter page, and give them your money! Battle Chef Brigade is a gripping new approach to fantasy action. The ecological aspects of hunting alone sets BCB leagues apart in an industry where successful innovation makes a world of difference. I’ve already secured my copy!