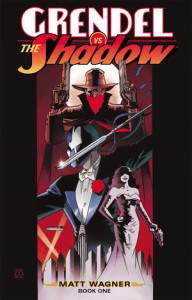 Sparks fly and bullets blaze when the original Grendel, Hunter Rose, is transported to 1930s New York and faces off with the original dark-night avenger, the Shadow! Two pulp-noir icons go head to head in this three-issue prestige-format series written and drawn by legendary Grendel creator Matt Wagner.

* A great starting point for new Grendel and The Shadow readers!

Not really a fair review, because I’m kind of a nut for the old “noir” style pulp heroes, the Shadow being front and center.  Seeing the Shadow on the front cover got my attention, and Grendel sunk the hooks in (I’ve also been a fan of Matt Wagner’s work for about as long as he’s been doing it).

The writing moves the story along pretty well, and there’s some great use of dialogue to keep you in the time period.  One of the things that I really liked in the writing is the use of a split perspective.  The reader starts out the book reading the thoughts of the criminal mastermind, Grendel.  He’s everything you’d want in an uber villain: smart, vicious, not afraid to get his hands dirty, and by all appearances he’s in the business for the entertainment value.  The money he makes in his “work” is more of a side benefit.

The perspective shifts, and the reader is now privy to the thoughts of Margo Lane… not as we’d expect, Lamont Cranston, the Shadow himself.  As the reader digs into the story, it gets to be pretty plain that Mr. Cranston is completely consumed by his role as the Shadow, and any insight we do get into his mind is generally filled with platitudes about the evil that men do and the over-riding need for a heavy dose of justice.  Ms. Lane gives the reader a little more to work with, as her perspective shows an insight into Cranston’s mind that even might not be aware of, as well as her personal conflict: on the one hand she is devoted to Cranston and the work that he does, but on the other she’s starting to doubt whether or not she’s an important part of his life.

The dual perspectives work well here, because we are dealing with two larger than life characters who each deserves equal billing.  Each has an individual and unique “voice” played out in the internal monologues, and each is given about equal time in which to work.

As always, Matt Wagner’s artwork does a great job of helping to tell the story.  It’s crisp and clean, without a lot of extra “noise”, and works to bring the old pulps of the 30’s and 40’s to mind.

Anyone not familiar with either of the characters might have some trouble figuring out who’s who, but once the story starts to roll out that might become less of a problem.  Besides, with this story as starting point, it might open up a few eyes to the classic heroes (and not heroes) who gave the likes of Batman a basis to grow on.  If I had one complaint, it’s that Wagner waits until the very last panel of the book before he brings our two combatants together.

Overall, I’ll give the book an A-.  That’s mostly because of the lack of background on the main characters, and the cruel cliffhanger at the end of the book.  Still, I enjoyed the read as time well spent.