on Kickstarter for just a little while longer!

“Zeppelin Attack! is a lean, fightin’ deck builder where you play a villainous mastermind in command of a fleet of deadly dirigibles!” 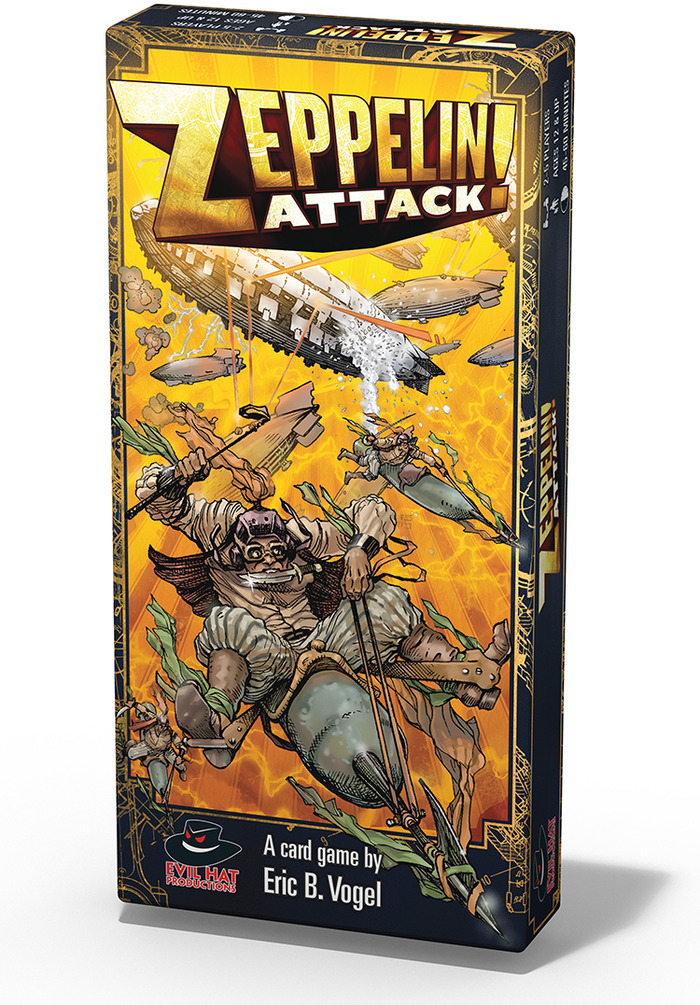 Zeppelin Attack! is a deck building game featuring targeted player combat. You play as one of the villainous masterminds from the Spirit of the Century pulp setting: Der Blitzmann, Gorilla Khan, Jacqueline Frost, or the Walking Mind, bent on subjugating the world with a flotilla of machine-age airships.

At the beginning of the game, your deck contains a rich mix of zeppelins, armaments, defensive measures, and operatives. Deploy your Armada—a face-up display of Zeppelin cards—to gain the ability to play other cards. Gain victory points by launching fiendish attacks against rival players to force their zeppelins into retreat. Use defensive counter-measures to deflect your enemy’s attacks. Send your minions on cunning operations to enrich yourself with fate points. Spend your gains on more powerful mercenary cards while purging weaker cards from your deck.

Unlike many deck-building games where the main emphasis is on buying cards every turn, the main action of Zeppelin Attack! is combat. Buying cards requires careful resource management over multiple turns. Zeppelin Attack! uses Eurogame-style mechanics inside of a pulp-fiction theme. The world of Spirit of the Century is woven throughout the gameplay, brought vividly to life by the artwork of Christian St. Pierre and the graphic design of Daniel Solis.

To read more, click the image above to check out the Kickstarter in its entirety.