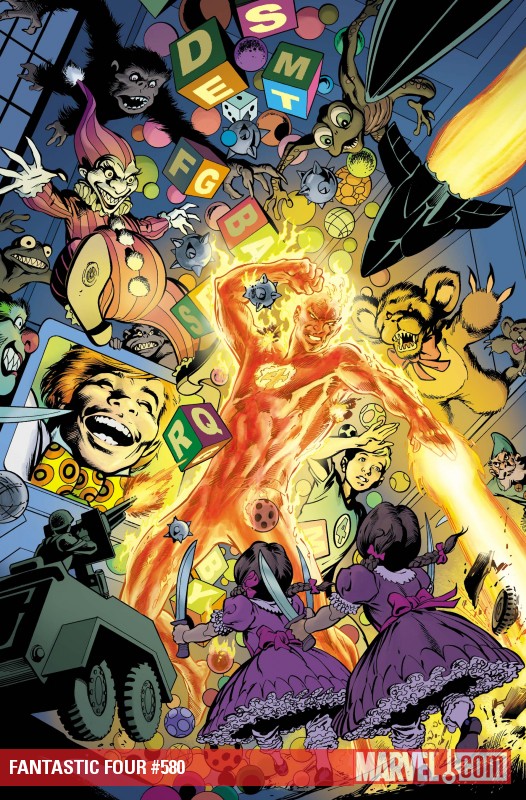 So, Marvel’s first family is leading the charge into a more heroic and hopefully a lighter age for Marvel comics and there pre-13 reading population.  Well so far, scribe Johnathon Hickman is doing a pretty decent job of keeping the balance of adventuresome and not too heavy.  This issue was constructed of two main story lines.

The first dealt with Reed forming his own think tank of younger minds, less constrainted by the assummed boundaries that come with observing the world, and trying to solve everything… yes, everything.  I think Reed’s interactions over the past year with the “Reed-corps” has pushed him to see if he can find a peaceful solution to “everything”.  The ish concludes with them successfully solving the first task they attacked… allowing Ben Grimm to move back and forth between human and his present rocky form.

With the Heroic Age move, I think this was brilliant.  This allows stories to revolve around the person hood of Ben (who at least for this fanboy is one of the emotional centers of the Marvel Universe).  Ben has been shuffled around and side-lined for a while now.  Nothing has been quite right since with his character since he left for France during the Civil War. For the last few years, writers have simply been using him as a “lovable thug”, rather than exploring his hero’s heart.   Some Ben-centric stories not involving Skrulls or the Hulk will be welcomed.

So, Hickman is doing well on the character side, it’s where he pushed the action in the issue where the water gets a tad thin.  Jim Gaffigan’s take on fruitcake (“fruit – good, cake – better, fruitcake – nasty crap”) is a great illustration for this issue.  Impossible Man – good, Arcade – better, Impossible Man and Aracde teaming up – really dumb!  Arade cons Impy into creating deadly toys for Earth’s children… and a solo Johnny Storm saves the day.  The best thing I can say about it, is that it didn’t work for me.  Glad it was done in a few pages.