A couple of weeks ago I had the pleasure of reading Scratch9 #1, a new family-friendly book coming out of KiZoic (Ape Entertainment‘s  family division).  Fantastic book – review here!  The creative team was kind enough to do an electronic Q&A with me, so here we go…

Eric: Hey guys, thanks for speaking with ThePullbox.  Scratch9 is such an enjoyable book, where did the idea come from?

Rob: I’m a pet person. I used to volunteer for an animal rescue league here in Michigan and have had two cats since the early 1990s; my boys Itchy and Scratchy! So I wanted to create something that sort of tapped into my love for these two furry critters who have been such a big part of my life.

Initially I had an idea to do a pet super-team, called the J.S.P.C.H. (Justice Society for the Prevention of Cruelty to Humans). I had dreamed up a very deep roster for the team and two of them were cats. But I was walking the floor of Comic-con one year with the JSPCH on my mind and noticed a lot of super-pet team concepts already out there. Ironically it was when I stumbled upon the Ape Entertainment booth and saw the first issue of “Go Go Gorilla and the Jungle Crew” that I hit my breaking point and decided to shelve the super-pet team.

I still wanted to do something positive about cats. The notion of nine lives is such a basic and universal part of cat mythology that I thought there was something interesting there. I focused down on one of the cat characters from JSPCH and kept tweaking it until it became Scratch9.

Sadly, both of the boys were quite old when I started this. Scratchy passed away in 2008  and Itchy joined him in December last year. So the book is especially sentimental for me because it means they’ll live on in the form of their comic book counterparts. 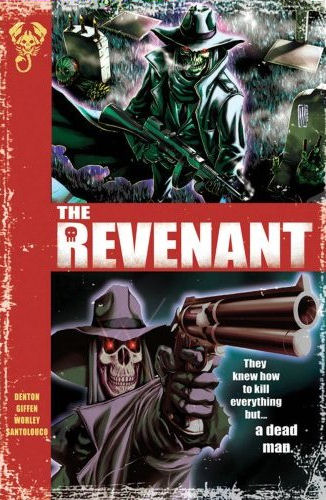 Eric: Rob, I loved Scratch 9 as much as I did one of your previous projects, The Revenant.  But the subject matter of the two books is pretty much as far as you can get from each other, was that a hard transition?  Gritty underworld undead to feline superhero?

You know, I love horror and started off writing horror stories. As a kid I was always drawn to monsters and gore even though it gave me nightmares. As a writer I’ve written a number of horror stories, for “Bryan Yuzna’s Horrorama”, “Tales from a Forgotten Planet”, etc. Even Marvel’s “Young Ancient One” had horror elements mixed with comedic action, much like “The Revenant.”

So I love that stuff. I still do.

But Shannon Eric Denton, the guy who created “The Revenant” and hired me to write it, he also got me writing for kids with his Actionopolis company. For that book line I wrote “Heir to Fire” which has horror elements, creature-feature beats as well as superhero high adventure.

That stuff is ALL fun to me.

But I like laughs as much as I like thrills and, like I said, I just love my little cats more than anything, so this seemed like a good way to blend all those loves and take them in a new direction.

And because of the nature of it, Scratch9 lets me play with a variety of character archetypes that I love, simply because every cat is drawn from a different time period and genre if you will. There are a few cats in the 9 that are a little weird or even scary. I have lots of fun pets to play with here.

Eric: Meanwhile Jason, one of your best known works is the World of Quest (another phenomenal family-friendly series), artistically speaking how would you compare working on Scratch to WoQ?

Jason: Well, I’m hoping I took my artwork to another level on Scratch. I concentrated more on nice, clear staging, backgrounds and more expressive characters. I learned a lot from doing the “Quest” books that I tried to apply to “Scratch”. Plus, the subject matter is so different that Scratch presented a new challenge for me. Since “Quest” takes place in a fantasy world, I had carte blanche to make literally every visual element up whereas Scratch takes place in the “real world”. Thus, I had to get used to drawing realistic buildings, vehicles, etc. I also tried to use a lot more shadows in Scratch.

Eric: The synthesis of the writing and art flowed very well, how did you two connect?

Rob: I met Jason when World of Quest was still a web-comic at Komikwerks.com, which is the site my some-time collaborator Shannon Denton helped create. I met him at the Komikwerks booth at Comic-Con and we hit it off pretty early on. I loved the work he did on Quest.

I was very lucky to be starting Scratch9 around the same time that Jason had a break between Quest volumes and got him to work with me. I have to say Jason’s been a pleasure to work with and it’s been the most problem-free comics project of my career.

Jason: Rob would call me up and yell obscenities at me until I got to work. Actually, like he said, we’ve know each other awhile and I have great respect for his work. He had sent me an early draft of “Scratch” and I knew immediately he had something here. So, I was thrilled that he asked me to work on it with him.

Eric: How did you guys connect up with KiZoic (a fairly new publishing company)?

Rob: In 2008 Jason drew five pages of the first issue so I could use that to pitch the book around. That summer the first place I went to was Wizard Chicago. I met the Ape Entertainment guys there and remembered that they had done some cool kids comics in the past (like “Go Go Gorilla”) and thought they might be interested.

Brent Erwin heard the concept and took one look at Jason’s art and fell in love with it. He immediately called Dave Hedgecock over to look at it. The were really on board with it very quickly after that.

I liked that they were already doing kids books and wanted Scratch9 to be with other kids books. Little did I realize that they had much more grandiose plans. It was later that I learned about their KiZoic line and the DreamWorks books and some of the other cool stuff that Ape has in the pipeline. So whereas I thought I’d brought Scratch into a good place, it has turned out to be an amazing place!

Eric: For me the look of the book and the emotions that the characters wear on their sleeves had a classic feel that made me very nostalgic for Calvin and Hobbes (meant as a compliment to Jason), and I think there is a real accessibility to this story, was that part of the design?.

Rob: I’ll leave that to Jason to answer that. All I know is he would send me cat pictures and I would have trouble deciding which ones I loved the most. He’s made Scratch, Penelope and the rest very appealing.

Jason: There’s no doubt that I’m greatly, greatly influenced by Calvin and Hobbes (and that’s a very big compliment from you Eric, btw). My intention was to make the characters as appealing and endearing as I could. If that invokes nostalgia for C and H then I think I did my job. But I’m also influenced by a lot of other artists out there (Jeff Smith, Mike Kunkel, etc) and I hope that comes through as well.

Eric: As a dad, I appreciated all of the added chuckles that were inserted for readers paying attention (my fav is still that the name of the baddie experimenting on cats is Dr. Schrödinger). How did those come about?

Rob: Jason and I are both fans of the current wave of animated movies from Pixar and Dreamworks and the like. There are so many layers of jokes in a movie like “Finding Nemo” or “Kung Fu Panda”. It really made me want to work harder to make sure Scratch9 paid off the careful reader as frequently as possible.

I also love how in Manga there are these literal sound effects. Little flourishes like that make the experience more fun, I think.  So the sound of a Sabre-toothed Tiger pouncing on a Grizz-bot is “Tackle!” I don’t know if people are aware of that.

Eric: hehehe, As a project as a whole, how much did you two impact each other?  Did it go from script to art or did Jason’s style have an impact on Rob’s script?

Rob: I wrote full scripts and gave them to Jason and Jason would often have suggestions about how to clarify the storytelling.

Jason: Rob’s scripts were always very, very strong but any time I had any suggestions Rob was always open to hearing them which made working with him an absolute pleasure.

Eric: In issue #1, Scratch was able to tap his Saber-Tooth Tiger life, you willing to give out any spoilers on who else he is willing to bring forth?

Well, readers of the first issue will also see the second issue’s cover which shows a very Egyptian-looking cat, so that’s a hint. Also, I’ll tell you that Scratch is only on his seventh life, which means there are two future lives yet to be lived. Those two aspects of the nine are quite fun.

Eric: Cannot wait for issue two, when is that due out?

Rob: The four issues of the mini-series will come out like clockwork: August, September, October and November.  We can guarantee this because all four issues are completed and ready to go to press right now.

I hate late-shipping titles and so do the Ape guys. It’s just really cheats the readers and the retailers. Having the work done on the entire series before we solicited the first issue was a must for this very reason.

Eric: Good call on that.  Okay, shameless plug time – any other upcoming projects coming up?

Rob: There’s a backup story I wrote for an upcoming “Graveslinger” mini-series. It’s a return to my horror writing and it won’t be suitable for children. It’s a very freaky little tale called “Snake Oil” with cool artwork by Nima Sorat.

And I have two story books coming from Magic Wagon for their Norse Mythology line: “Heimdall” and “Loki”. Those are intended for beginning readers and are priced for the library market.

My main focus is on Scratch9 right now, so thanks for helping us get the word out!

Jason: The World of Quest animated show aired on the CW in the spring of 2008 and ran an additional season in foreign markets. There’s a DVD release coming later this year, I believe.  Right now, I’ve got a couple of projects in developments and should hopefully have some announcements about them soon. Hopefully by Comic-con

Eric: We look forward to them Jason

Once again, Rob and Jason, thanks for spending time “talking” with us!