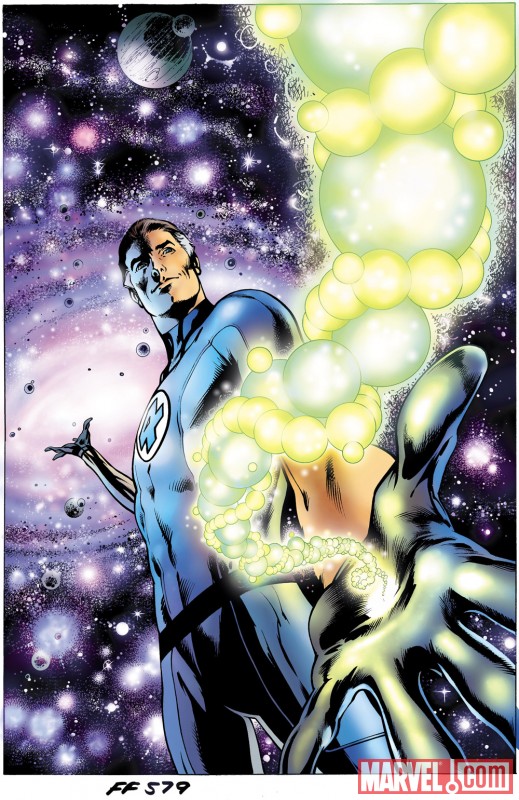 When I say this, know that I am not talking about censorship.  I think the fanboys out there that want to read Ellis and Moore and what have you… go for it.  If there is an audience, then there is an argument that says the art can be made.  But as a father geek, I am happy to hear that at least one of the big two will be having some mainstream family-friendly books that I don’t have to preview for my pre-teens (grey morals, explicit sexual content and mature plot devices have been the mainstay for a majority of the Marvel / DC books over the last few years.

From Kevin Mahadeo and Marvel.com – As the Heroic Age dawns, writer Jonathan Hickman and artist Neil Edwards propel the First Family of Marvel into the new era in the pages of FANTASTIC FOUR by asking with their upcoming arc: “What is the Future Foundation?”

“It’s probably the issue that I’ve been looking forward to writing the most since I started the book,” admits Hickman. “I guess I’d call it my manifesto for the series. How I feel about the FF and what their place is. It’s very timely.”

It all begins with May’s FANTASTIC FOUR #579. The issue kicks off the “Future Foundation” arc as well as introduces the super hero team into the brand-new Heroic Age, a place Hickman says the fantastic family fits into perfectly.

“The FANTASTIC FOUR is a book that does well in an environment where heroes are heroes,” explains the writer. “If you look out the window and see how things are, I think it’s appropriate and timely that we have a super hero book that’s about a super hero family and doing things right. A book that’s kind of nostalgic but also about the future and what we can be. I think it’s very appropriate for where we’re going thematically at Marvel.”

In “Future Foundation,” Reed Richards takes a journey of discovery into his own hands when the world faces the improbable death of imagination. Hickman says the story addresses the idea of social change through generational shifts and the possible dangers found within.

“One of the things that marks [that change and those dangers] is that the people from the previous generation, they’re kind of old and live out of fear,” he notes. “Everything is about living one more day and doing things

for the now instead of embracing what it is that makes us human, and that is being explorers and bold and fearless and doing things that are outside the norm.”

Hickman also says that the younger generation of characters in the title will continue to play a big part moving forward. Since he began his run, the writer has introduced a number of younger faces into the book, including Artie, Leech, a kid version of the Wizard, and even a group of Moloid children.

“One of the things I wanted to do was fill up the Baxter Building,” says Hickman. “I don’t think this family is the kind of group that would go on an adventure and then there’s fallout and they leave it all behind. I think they take everything home with them, and that demands that they do things a certain way. They’re shepherding the next generation of super heroes.”

Artist Neil Edwards pencils the arc and Hickman says he really relates to the artist.

“He’s excited and exuberant and trying really hard and getting better very quickly,” enthuses Hickman. “I kind of identify with him and I think we’re working pretty well together and I’m certainly happy with the progression that we’re seeing since he’s been on the book. The pages he’s been turning in are pretty damn solid. I’m interested more than anything else in really solid storytelling and he seems to be doing a good job of that.

“It’s funny. Nowadays, you have to prepare yourself for the fact that it’s not going to be you and another artist on the book. It’s always a team of guys or a rotating cast of guys. The thing you want more than anything else from the body of work of all those guys is that they can tell a solid story. And I’m fortunate that I’ve got guys who can do that.”

As for what the future holds for the World’s Greatest Comics Magazine as the Heroic Age continues, Hickman says he already has planned until issue #600, which hits within months of the title’s 50th Anniversary:

“We’re putting a bunch of pieces on the table. ‘Prime Elements,’ the story that we’re in right now, is really about setting up the return of really big Fantastic Four characters. And doing it bigger and more fantastic and more amazing. If I’ve done my job correctly, all of the familiar faces will have a new, interesting shine to them and we’ll be able to do things a little bit more differently in a way that’s interesting.”