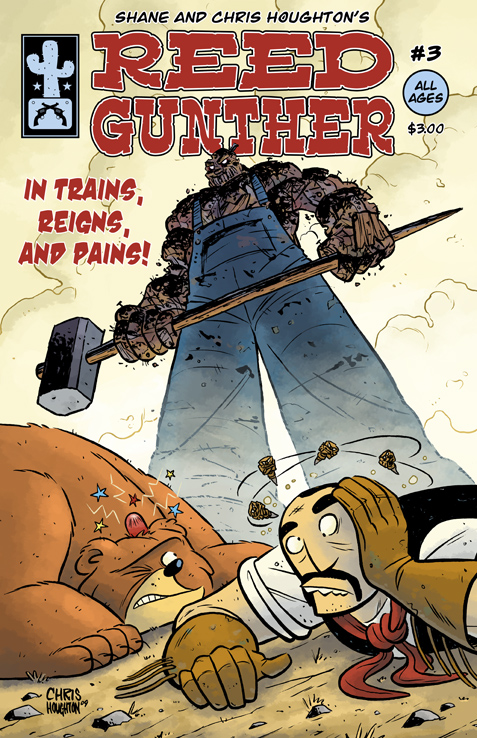 Trains, Reigns and Pains! – Follow Reed Gunther and his trusty bear, Sterling, as they ride through the adventurous Old West! Whether they’re battling supernatural monsters, tracking down slimy villains, or catching a runaway train… you can bet they wish they were doing something else!

Way back in the recesses of my memory I recall sitting on the back porch and reading old Harvey comics, well not just reading… reading and re-reading to the point the comic itself was falling apart.  Harvey comics stood out in my mind because they were fun, adventuresome and they were “serialized”, meaning that usually the entire issue was one or two continuing stories (in contrast to Looney Tunes or Disney that had a new story, gag and punchline every six frames).  Casper, Richie Rich, Wendy the Witch, Herman and Katnip – these were the characters that inspired my imagination and showed me how fun a good adventure story could be.  And the folks at Harvey did this while keeping it family-friendly.  That is a feat that, as far as this dad is concerned, is one of the most inspiring ones that can be made in the media landscape of today’s world.

That long winded introduction was simply to verbalize what reading the Houghton Brothers’ Reed Gunther brought me back to: comic excitement, adventure and fun!

Just like the classic Harvey series, Reed Gunther is filled with action movie excitement and enjoyment, without any of the PG-13 baggage.  The series (and web comic) follows the good-hearted cowboy Reed (that for whatever reason I can see John Ritter playing the role), his bear Sterling and their gal pal Starla as they practically stumble their way through adventures making a way for themselves and helping folks along the way.  Brother Shane, the author, lays down a story that would hook any elementary age student immediately – magic idols, ghosts, greed-driven bad guys… even a fight on the roof of a moving train!  Brother Chris, the artist, has done his homework.  I can only imagine that he looked back at the more than half-century of “all-ages” comics that came before him and was able to figure out what worked and give his own spin to it.  He has created a look and feel for this B&W cartoon-style book where he is not only able to express action, emotion and movement for the characters but also have it flow well and easy enough to navigate so the even the youngest of readers can feel comfortable.

Here at The Pullbox, we have a belief about the comic industry at large and the Independents specifically… The best talent out there are the people you haven’t heard about yet and they are working on books you haven’t read yet.  Shane and Chris Houghton’s Reed Gunther is a prime example of this.  These true independents have done some incredible work here that you will be sorry if you miss out on.

You can read their webcomic and order their books from their site, here.

It took me a day or two to place, but this was not the first time I had come across Reed Gunther – check out my review of Comics Obscura #3 from Summer 2008.