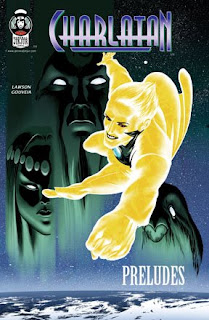 Very recently I had the pleasure of talking with Gil Lawson, the main force behind Charlatan and General Jinjur comics

Eric: Gil, I really enjoyed Charlatan: Preludes and look forward to what is coming next. thanks for talking with Thepullbox: From your intro, it sounds like you are no stranger to comics and geekdom, can you give us a little bit of background on yourself?

Gil: I have been reading comics as long as I can remember, so that roughly translates into about 35 years of being a comics fan. People divide pretty neatly into either the Marvel or DC camp when they talk about youthful fandom and I was definitely a dyed-in-the-wool Marvel kid growing up. Comic collecting was a huge part of my world from the age of 7 or 8 until my early teens. In the late 80s and throughout the 90s I found myself reading both DC and Marvel books with equal interest along with a lot of indie books; comics like Elementals, Badger, Nexus, E-Man, and Grendel opened my eyes to amazing universes and characters outside of the Big 2. I still love reading books from that time period and just the other day was lucky enough to pick up the first 20 issues of Ostrander and Truman’s GrimJack–great stuff. These days, sadly, I read very few Marvel or DC universe books–but I still read a ton of comics each month and visit my local library every week to see what new books have come in.

As far as personal background goes, my wife Jen edits our books and comprises the other, better half of General Jinjur Comics. We have two beautiful daughters–one teen and one preteen–and they are both wonderful contributors to all things Jinjur.

Eric: What was your purpose / drive to become an independent creator?

Gil: A lot of what I want to do with Charlatan and with our other planned series is recreate the fun experience of superhero comics that I remember growing up as a kid in the 70s and 80s. In my opinion, over the past few years Marvel and DC have to a large extent stopped producing the kind of fun, heroic stories that thrilled me for most of my life. A big part of my motivation with Charlatan and General Jinjur Comics is to bring back the sense of wonder and strong storytelling that I feel is missing from most recent titles put out by the big publishers. So my primary answer would be that I want to create heroes and stories and a cohesive comic universe to help fill that niche that I find lacking in the majority of today’s popular superhero books.

Secondly, I love to tell stories. And, very importantly, I want to tell stories that can be shared by both adult readers and young adult readers. Charlatan and the other books we have planned in the Jinjurverse will allow me to tell what I hope will be fun tales that stoke the imaginations of teen and adult readers. Don’t get me wrong–I love Watchmen and V for Vendetta and Dark Knight Returns–but those were seminal superhero books twenty years ago. Twenty years is a long time to be stuck in a seemingly endless loop of looking at heroes through a dark and anti-heroic filter. We want to make comics that rediscover what it means to be a hero–and by doing so explore the “brighter” points of human nature and our characters.

Eric: Why the Charlatan story? Where did this idea come from?

Gil: I was on a business trip to Chicago and really missed my wife and daughters–in those days I had to travel for my job a lot more than I cared to. While on that trip, I began to sketch out the notion of a hero who would be faced with the toughest decision a parent can have–would he or she sacrifice a child if the fate of the universe depended on it? Of course, the plot convention of the “chosen one” has been played out a zillion times already, but I thought it might be fun to have the hero try to be a stand-in for his daughter who was the real chosen one. So…what if my story entailed a protagonist who had a daughter destined to grow up to be the supreme super-powered champion of the universe and ultimately he found he couldn’t give her up to that life? And what if all the evil forces in the universe came gunning for his little girl and with only limited powers he had to try to protect both her and the planet in a time of crisis? That became the basic premise of Charlatan and, of course, that’s where the title comes from: Augie Halford is a charlatan attempting to play the role of a supremely powerful hero.

Eric: How do you think Charlatan is different from the mainstream superhero comic?

Gil: I would like to think there are a few key differences that make this book and our other Jinjurverse books standout from other mainstream books. First, these are story-driven comics–just like the books I grew up loving. We set out to pack both a lot of great art and a lot of narrative in these pages and I think it is increasingly hard to find
that in mainstream books today. We are focused on creating compelling characters and storylines to complement the gorgeous artwork from Zeu. Second, we want to make complex stories that are great reads for long-time fans but also “content safe” for older children and teens. I reject the notion that you should have a line-up of “just for kids” books and then a separate line-up of books for adults–yet this is how mainstream publishers approach comics for kids these days. Charlatan and our other books are like old-school superhero comics in that they are designed for adults but they are also perfect for sharing with younger readers. We want to help foster that next generation of superhero fans and stretch young adult imaginations and vocabularies–you don’t do that by making them sit at the literary equivalent of the kiddie table Third, I hope we are looking at superheroes from a fresh perspective and are providing stories that tweak the conventions of hero comics while still being true to the genre’s core elements. We certainly tried to do that with our spin on the “chosen one” theme and I think we opened some interesting ethical and moral dilemmas for the Halfords based on their choice.

Eric: I know your wife is a partner in General Jinjur, were you two a basis for Augie and Mary in the story?

Gil: I’m really glad you asked that question because we get it quite a lot–but, no. You only need to take one look at Augie’s six-pack abs on page 9 to know that I was definitely not the model! However, the struggle which Augie and Mary go through is certainly my way of fictionalizing some of the challenges Jen and I had faced having a daughter born with a serious congenital heart defect–the plot convention of having your world turned upside down in an instant by a child in crisis is definitely something I pulled from that chapter in our life. Personality-wise, though, Augie and Mary Halford are truly independent characters who aren’t rooted in my experience of anyone in particular. Augie is hopefully a more grown-up and relevant version of the “loser with a heart of gold” archetype that is a foundation for many modern superhero comics–only instead of trying to figure out how to scare up some extra cash to take Mary Jane Watson to the prom, he is more concerned with paying his mortgage on time and his career.

If there is a character with whom I most identify, it is probably John Walters–Augie’s best friend who gets introduced in Charlatan: Preludes. John is both an introvert and a tech geek. The character I most wish I were like is Artemus Wax, an important player who will be showing up in the next book. Wax is a master at hand-to-hand combat, has a ton of supercool gadgets, lives in a secret underground complex, and has a semi-sentient operating system based upon Edgar Allan Poe as his sidekick.

Eric: Speaking of General Jinjur, where did that name come from?

Gil: The name is taken from a character in L. Frank Baum’s sequel to The Wizard of Oz–The Land of Oz. General Jinjur is a character who takes over the Emerald City with an all-girl revolutionary army brandishing knitting needles. We thought that this character who challenged the authority of Oz’s ruling powers would be a great icon for a micropublisher who tries try to tackle making superhero comics in today’s tough marketplace.

Eric: What books do you get every month (if any)?

Gil: I am regularly following Jack Staff, Astro City, everything in the Hellboy/B.P.R.D. Universe, Fables, Ex Machina, Top 10, Robotika, The Black Coat, Athena Voltaire, Jeff Smith’s Bone trades, and JSA (my only regular mainstream title). I am also picking up James Robinson’s run on the Superman books because he is the writer I want to be when I grow up; I owe him a debt of gratitude for Starman that can never be repaid. Ted Naifeh’s Courtney Crumrin books are a hot property in our house whenever a new one comes out and I have just started reading and loving Batton Lash’s Supernatural Law books–it was a real treat to meet him at WonderCon this year. I am most eagerly awaiting the release of Jan’s Atomic Heart by Simon Roy from New Reliable Press.

Eric: What is coming up in the Jinjurverse?

Gil: Our second book in the Charlatan series, Charlatan: Homecoming is about halfway done and with the outer space origin story completed in Charlatan: Preludes, a ton of new heroes and villains appear as the conflict begins on Earth. I am really excited about this second book and the fact that many of our Jinjurverse characters will begin to roll-out and launch into action. Our second planned series is titled Stray and it deals with a young teenage girl who is granted catlike powers. Stray makes her debut in Charlatan: Homecoming before launching into her own book in 2010.

Eric: Okay, shameless plug time, besides visiting their locally-owned comic shop (which is always my first suggestion) if the readers out there would like to get their hands on Charlatan (which I highly recommend!), how do they do that?

Gil: Unfortunately, like many independent publishers these days, our Diamond order numbers have not been as strong as we would like. Due to the less-than-stellar initial order of our book by comic shops, I would like to suggest that people check our website (www.generaljinjur.com) –we will be listing retailers and comic shops who we know are stocking and supporting Charlatan. Charlatan: Preludes is also available with free shipping on our website and it is in stock at Amazon.com. We have been picked up by Barnes & Noble as part of their graphic novel selection and hope to be in their stores and online at BN.com soon.

Eric: Besides continuing to highly recommend your book – What else? Did I miss anything?

Gil: Well, I didn’t have a chance to squeeze it in before, but I wanted to sincerely thank you for allowing me to talk about our book with your readers. I also wanted to let your readers know that the first 30 pages of our book are currently posted on our website–so anyone who is interested in checking out Charlatan can experience Part I of Charlatan: Preludes for free on www.generaljinjur.com. Thanks again.

Eric: Thank you Gil, for the interview and for making the Independent comic landscape a little better!