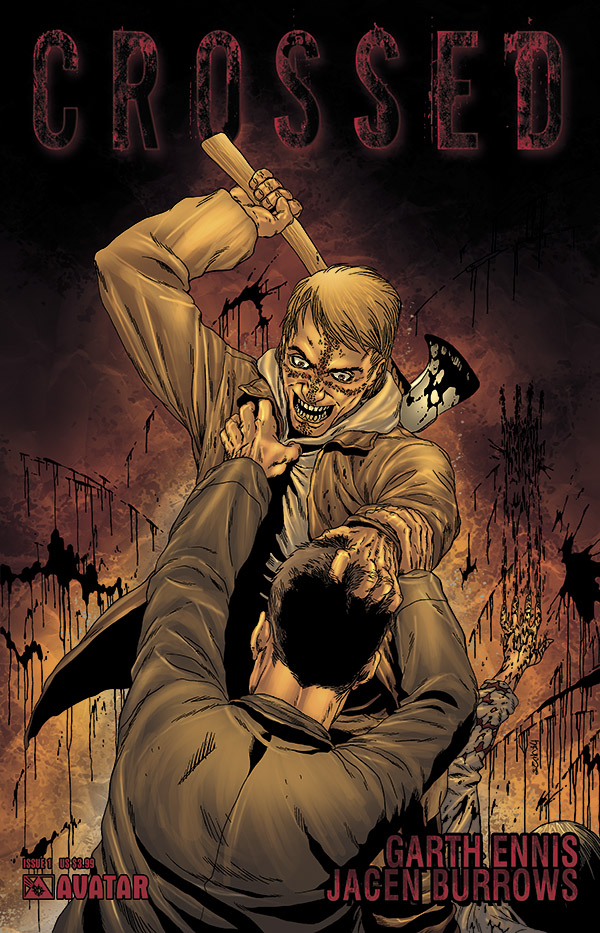 See, the problem is it’s Garth Ennis, so you know immediately you need to pick it up and read it.

Crossed is basically a zombie book, the whatever it is that spreads to the populace turns folks into ultra-violent, sexually depraved nut jobs and then some. The graphic nature of this book puts Warren Ellis’ Black Gas to shame. It’s like they were sitting around havin’ a pint and said “Oh, I can do worse than that”. Crossed obviously stands not only for the strange markings the inflicted have, but also the line of graphic intensity the book might have crossed. So be warned.

Now, my problems with this book isn’t it’s graphic nature so much, but if you are going to cross that line so far, it had better be for an awful good reason. Some super fresh angle on the whole zombie apocalypse, humanity unfettered theme. And, well, I haven’t really seen anything new here except the graphic nature. Might a been better with a regular level of zombie violence and dismemberment, instead of this new ultra-depraved type.

The characters are okay, but nothing special. The story moves well enough. Jacen Burrows art is weak, but clear. I am not thoroughly engaged, by any of it. I am holding on though because it is Garth Ennis and better things might be coming.

Overall Grade C-, Waiting for what new ideas to go with all the depravity and intenstines.