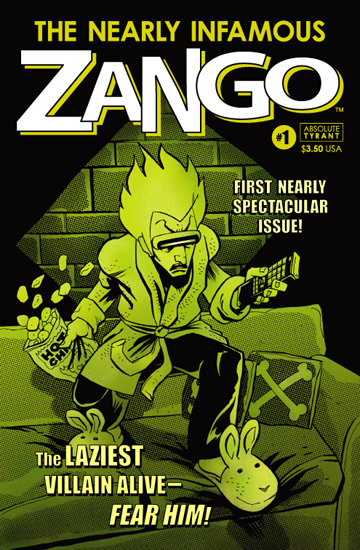 The Nearly Infamous Zango #1 (Absolute Tyrant – Osborne) – Lord Alfred Zango, Jr. was once the most feared super villain in Metrotown. He razed entire blocks, crushed super heroes beneath his heel. Now he’s just a malcontent couch potato. In bunny slippers and bathrobe, Zango gorges himself on junk food and fumes over the media attention that other super-baddies receive. Too lazy to leave the house, Zango sends a gorilla assassin to eliminate his competition! From the award-winning creator Rob Osborne comes this hilarious and offbeat look at super villainy. In all honesty, I was a little doubtful of this book when I first started to look at it, but in no time at Lord Zango quickly won over my quirky sense of humor. I don’t know whether it was his snide remarks when watching the local news, or the interplay with his daughter Nebula, or perhaps it is the relationship with his all-admiring sidekick Deacon Dread… whatever it is Zango is a blast! Rob Osborne, creator and artist, has brought together a book that will make everyone giggle, comic book fan or not. Short of one “cartoony” bloody fight scene between an evil henchman and a razor-armed killer gorilla, this would be a all-family book. The Nearly Infamous Zango can and should be found on page 201 of this month’s Previews. He’s Zango… laugh at him, but Fear Him!