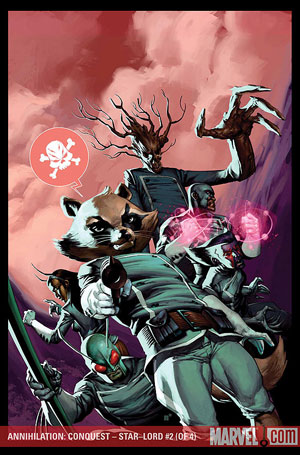 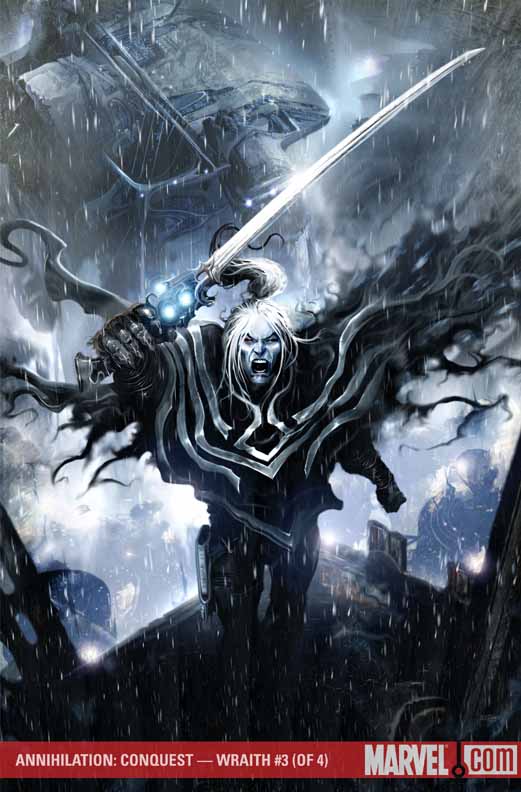 Star Lord #3 (Marvel –  Giffen / Green II) – Okay, so I know that these books have been out for a few weeks and Star Lord #4 shipped this week, but that doesn’t mean I’m not going to give my 2 cents. Bottom line is that I very much enjoy the Star Lord book. It’s basically the Dirty Dozen in space (and if you don’t know what that is GET THEE TO A VIDEO STORE). It’s a rag-tag group of intergalactic prisoners sent on a suicide mission for the Kree.

This issue opens up with out heroes involved in a battle and never lets up from there. Giffen does a great job and mixing action and meaningful dialog. Never did I feel there was a slow part in the book, and much like The Dirty Dozen, main characters die. The art is much like I said last time. There are moments of greatness, but I didn’t feel that the overall look of the book was anything new.

Wraith #3 (Marvel – Grillo-Marxuac / Hotz) – Wraith is the new anti-hero that Marvel has introduced during the Conquest cross-over. In the last issue we got the full story of who/what Wraith is and why he’s less than happy. This issue, Wraith communicates with his dead father (we hope in his head) who tells him to continue his fight against the Phalanx (tech organic alien conquerors). Fight Wraith does, and he brings an ally. The whole “enemy of my enemy” story applies then let the Super-Skrull have a go at the Phalanx.

There are a few big reveals that I will not give away, but trust me, it’s big.