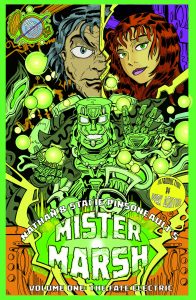 HOW FAR WOULD YOU GO TO SAVE A LIFE?

Macon Marshall, an everyday, ordinary farmhand finds himself trapped in a fatal fire with his trusted friend, Madeline “Maddy” Maple. After Macon suddenly vanishes without a trace, Maddy is left as the only survivor and the only one capable of picking up his trail. As her search goes on, she soon finds herself in an epic confrontation with the arrival of a Strange, Mysterious “Metal-Man”, a being whose peculiar behavior seems somehow familiar… Is there a connection between this Cosmic Creature and Macon Marshall? Who is the Man who waits for him in Eighth City? What TRULY happened during the fire that started it all? Was it an accident or planned? And what does the Mysterious Metal-Man’s appearance herald for the rest of the 819 Universe?

FIND OUT IN THE VERY FIRST ISSUE OF MISTER MARSH! THE SAGA BEGINS!
———-

Mild mannered farmhand Macon Marshall had no idea his life would change one fateful night in the quiet rural setting of Carter County. But as often happens in life- and in the fantastic world of comics- once Fate has you in its sites, there’s no dodging or weaving you can do to get out of the way. Trapped in a burning barn with his employer, the lovely and high-spirited Madeline Maple, Macon’s first concern was to get “Maddy” clear of the conflagration. With the barn’s main doors blocked, the only other chance for Macon and Maddy to escape was to climb to the loft and take a leap of faith from the upper level. With Maddy one step away from safety, Macon’s world dropped out from under him as the floor gave way beneath his feet… plunging him into the inferno below.

Hold on now, don’t go getting all choked up. This is a superhero comic, of which Macon Marshall is the title character (you can totally tell by the alliteration in his name), so he’s gonna be fine. Through a twist of the aforementioned Fate, Macon’s life doesn’t end in that burning barn. Friendly farmhand Macon Marshall may have gone into that barn an Average Joe, but at the whim of forces unknown he will step back out as the armored Mister Marsh!

Sure, as far as superhero names go, “Mister Marsh” may not be striking fear into the hearts of evil doers. They are, after all, a superstitious lot and that sorta lacks… punch. However if there’s nothing else to be said about the flagship title for fledgling indie publisher 819 Comics, it is definitely quirky and full of hints of great (and strange) things to come.

Their bio at the end of Mister Marsh’s first issue says that Stacie and Nathan Pinsoneault are joined, not only in matrimony, but also in the ties that really and truly bind: a love of all things Nerdy. It was a love of science fiction in particular that motivated them to put their heads together and create something wholly their own. I’m sure that nothing about the process was easy, and without a doubt it is an ongoing thing, but I can say with the assurance of one who’s been reading comicbooks for a very long time that their first swing hits the mark.

Mister Marsh is a bit of a throwback, reminding me from start to finish of the old sci fi adventure stories from the Golden Age. If that was in fact their goal, I will have to say that the Pinsoneaults failed in one area… the writing. Don’t start yelling at me, I know that we love those cheesy old comics first seen on the old squeaky metal spin racks in the corner dime store. But I don’t think there’s one among us who can’t admit that as fun as it might be to go back and read the old stories, the warm and comforting feeling of nostalgia somewhat coloring our perceptions, the writing was just a wee bit dated by today’s standards. Sometimes I might even use the word “painful”, but still they’re the stories that we love and they paved the way for everything that came after. Alliterative names aside, Mister Marsh really doesn’t suffer from any of that, nor does it bear the jagged marks of many fledgling writers in that it’s actually pretty well polished. The dialogue flows, and in particular I got a kick out of Macon’s inner monologue. He’s the Everyman dropped into the role of “superhero”, stumbling about as he begins to discover his new abilities. Sure, the story was left with gaps, but this is an introductory issue with a lot going on between the pages so that’s to be expected. In fact, that very thing gives me more respect for the Pinsoneaults as writers because it shows an ability to let the reader discover the “819 Universe” as they’re creating it, without heavy-handed exposition doling out more info than we need. That’s a rarer quality than you might think, and it’s a trap that much more experienced writers have fallen into.

On to the artwork… This was the thing that really caught my attention when I first got wind of Nathan, Stacie, and 819 Comics. Mister Marsh has a very retro, stylized look to it. From the start, it kept bringing to my mind some of the work of the great Jack Kirby, particularly in his designs for the New Gods and Asgard. The backgrounds are interesting, never left blank and always with something going on to keep the eye moving. The character designs work great, with all of the variety needed to keep everyone distinct and individual. The figures themselves are only occasionally awkward looking in their poses, but it’s all part and parcel as part of the learning process, and if I may be so bold it just adds to the overall charm of the book.

In the end, Mister Marsh’s first issue has me absolutely wanting to see more from Stacie and Nathan Pinsoneault, and I’d like to thank them for trusting me with a peek at their labor of love. Also, I want to give a shout out to Dyrk Ashton for recommending their book to me in the first place. This one gets a thoroughly entertained “thumbs up”. 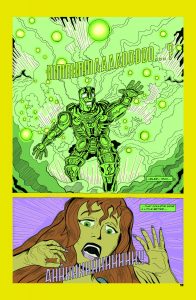 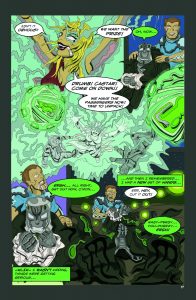 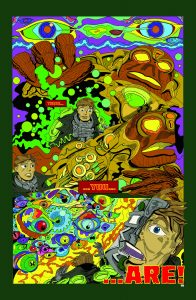 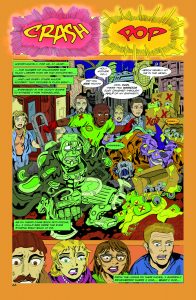