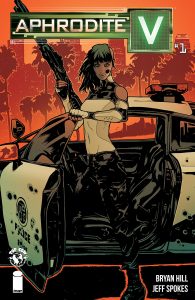 In the near future, Los Angeles is a city on the brink of evolution, struggling with a new wave of terror fueled by black-market technology. Enter Aphrodite V: a fugitive from her masters, seeking individuality and purpose. She is the bleeding edge of biomechanics, and L.A.’s best hope against a new enemy—one that seeks to become a god among machines. One machine wants to destroy the city. Another has come to save it. Only one will survive.
———-

Martin Carver has a vision. He sees a future in which Los Angeles is hailed as the safest city on Earth, where the police have every tool they need, when they need it, and maintaining the peace isn’t bound by budgets. When he’s attacked by a heavily armored, cyber-enhanced gunman, Martin has the added benefit of seeing the future firsthand. Fortunately, the gunman isn’t it…

I was introduced to the world of Cyberforce and Aphrodite (IX at the time) a while back, pulled in by the artwork of Stjepan Sejic (still waiting on more Death Vigil, by the way…). Looking back at that twisting pile of continuity, it’s amazing I made it out in one piece. There’s just a lot. Never fear, though, because Bryan Hill and Top Cow have taken a step through the Wayback Machine (points if you get the reference… Sherman) to the earlier days of the Aphrodite program. While the story so far gives every indication of being just as complex and winding, we have the benefit of being able to learn as we go rather than being forced to play catch up. We also have the benefit of this older/new Aphrodite being in some pretty impressive hands, creatively.

Bryan Hill… just gonna dive into the lovefest here, because in recent months I’ve come to regard him as one of my favorite writers in the comicbook industry today. First, he jumped onto my radar with one of the most unlikely crossovers in the Black Lightning/Hong Kong Phooey one-shot from DC, where one of my favorite Saturday morning cartoon characters was given a serious treatment and transformed into a full on badass. After that, I followed Hill into Top Cow’s new Cyberforce series, where he’s sharing the writing with another favorite of mine, Matt Hawkins (if you haven’t read Think Tank, you’ve missed out on some outstanding storytelling). Admittedly, I wasn’t much of a fan in the early days of Cyberforce, but this iteration has me hooked with its more relatable characters and gritty look.

Not really a huge stretch to think that I’d be picking up Aphrodite V.

Bryan Hill didn’t disappoint. While he spends much of this opening issue with his characters sitting around talking, not one bit of it was a chore to read (I’m not one of those comicbook readers who needs explosions & cars being tossed about… all the time). In this case, it’s all time well spent as Hill introduces all of the major players in his story. Martin Carver, “a gay black billionaire with a 195 IQ”, presents an interesting figure as the brilliant but socially inept visionary who wants to leave the world a little bit better than when he found it, political/legal niceties be damned. Carver’s assistant/bodyguard/handler Hui-Men is much more than eye candy for the fanboys, looking good while kicking ass to be sure, but also having motivations that appear to go deeper than any stereotype. Everyone in the book so far has been given a distinctive “voice” that sets them apart from everyone else in more than just the visual sense expected in the comicbook format. More importantly, no one seems to be relegated to two dimensional placeholder status… except maybe for the overly aggressive mayor of LA, but aren’t most politicians just two dimensional placeholders these days?

Moving on to talk about something else now, because if Bryan Hill actually reads this we don’t want him getting such a big head that he tips over.

Jeff Spokes does a great job of gifting each character with a look that sets them apart from anyone else around them (despite, maybe, some similarities I see in facial features between Aphrodite and Hui-Men). Visually, the book is broken down by color palettes- orange & yellow during the action sequences, with more subdued greens and blues during the quieter moments of interaction between Aphrodite and Martin. Throughout the book, color looks to play a major part in setting the tone of a scene or even an individual in the scene, and it gives the story a grittier feel than one might expect, particularly if they were at all familiar with the original series. Personally, I see a lot of cyberpunk in this one, which is totally fitting given the subject.

If I had to pick one thing I might like to see done different, it could be to open up some of the panels during the action sequences. Where the smaller, more rapid fire panels give the action a quicker pace, they can lose detail- in the issue’s first fight scene, I lost track of who was where and doing what to whom. Now don’t go waving your hands in the air, I’m not claiming any degree of expertise in layouts & design, and I’m fully able to admit that this is just one perspective that doesn’t really amount to much in a big picture. I’ve read a lot of comics in my time, and I know what I like. Just like in a movie that films its fight scenes with close angles and a shaky camera- to give viewers the feeling that they’re closer to the action- I just prefer wider shots so I can see the choreography more clearly.

Crunching the numbers, Bryan Hill and Jeff Spokes have handed in an outstanding opening chapter to what will hopefully be a great, long-running series. Fans of sci fi action, cyberpunk, or just varied & layered characters have a lot to take in with Aphrodite V. Please, for the love of all that’s holy, don’t take my word for it… run out to your local comic shop/reader app and check it out for yourself. If for no other reason, do it so that you can come back to tell me I’m full of crap for the panel size comments. I can take it. 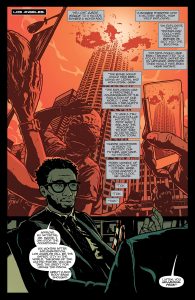 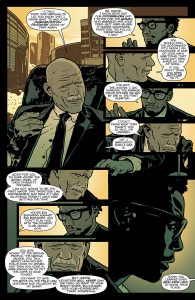 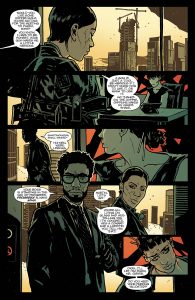