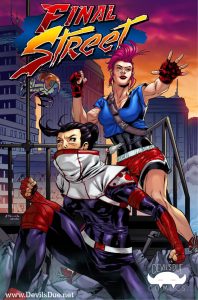 Double Dragon! Streets of Rage! Final Fight! If you are a man-child of the 80s, the mere mention of these titles make your fingers twitch with excitement. As soon as you flip past the cover, Final Street fills you with that 80’s nostalgia that brings a midi-style tune to your years. Scott Schmidt and Brian Atkins have created a four-color time machine back to the days of button mashing for justice.

As a fan of the old school beat’em ups the story is pretty straight forward, but Schmidt and Atkins turn the basic story on its ear. Many of the early video games had the basic “Save the Princess” style story, unless the game was Metroid. Final Street brings that concept into the 21st-century where these tough as nails woman can handle themselves just fine and leads to action. Readers are introduced to Sullie and her boyfriend Franklin as hit a ramen shop after arm day at the gym. With little time to dig into noodle-goodness the local gang, The Brawlers, nik Franklin from the restaurant, leaving Sullie confused but ready to rumble. Like most early Nintendo/Sega games, no one fights alone. Enter Kumi, Sullie’s ninja bestie who kicks some serious ass.

From here on out, Final Fight #1 is a smorgasbord of console and coin-op fighting game references. After catching the first couple of bits I thought I would get bored by it, but before I knew it I was at the end and still wanted more. Schmidt does a great job of retelling a story that most nerds already know, but in a way that keeps us reading and loving what’s on the page.

As talented as Scott Schmidt is, a book like this just won’t work without a top notch art team. The combination of Brian Atkins art at Juancho / Carlos on colors is what will make you look at this book. On the initial flip-though, your going to see solid action scenes and character designs that feel familiar but make you smile.

The colors? OH MY GOD…THE COLORS! They are as bright as my child mind remembers the video games of youth to be. I spent lots time pouring over every inch these pages looking at the characters, backgrounds, and all the bit and pieces that brought grins to my 40ish year old face.

I’d be remiss if I didn’t mention the presentation of the comic in this review. Unlike a lot of mainstream comics where the presentation isn’t always a needed selling point (I’m looking at you ugly cover banners), for an independent comic, it could mean the difference between being picked up and bought and left on the shelf. I’m going to assume that Schmidt and Atkins thought up the presentation, so I’ll give them the credit here.

Bottom line: 100% Grade A All-America FUN! This book drops in June, so you still have time to get to your local comic shop and have them pick up a few dozen copies for you and your friends.