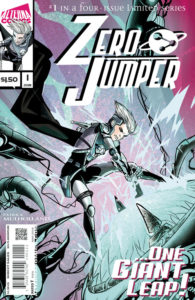 An ancient power source that can manipulate space and time is buried deep on a barren world and Juno, the last human, must embark on a dangerous journey to find it. Her mission is simple: go back in time and save humanity from extinction. The cost? Her life.
———-

Juno is on a mission to undo a mistake. Just one mistake that changed everything, and none of it for the better. To do this, she’s going to have to collect the Zero Point energy that will allow her to travel back in time to head off the catastrophe before it happens. It isn’t going to be easy. Zero Point energy is extremely rare and anywhere that it may be found, it’s a fair bet that there are going to be forces determined to hold onto it at all costs.

By the end of the first page, writer & artist Patrick Mulholland has laid out everything we need to know to be drawn into Juno’s story. In a flash of blinding light, a figure appears in the space above a strange planet. In the background hangs the cosmic wreckage of another planet, cracked open like an egg. In her own words, Juno tells us that she’s made a promise, and to keep that promise she’s willing and ready to lay down her life. Before we even know what mysterious MacGuffin serves as the target of Juno’s quest, we know that the stakes are worth a headlong charge toward her own death.

If it sounds familiar, that’s because the premise itself isn’t knew or all that complex. “Hero needs _____, in order to _____.” It’s the Quest that you’ll find in many heroic myths, that has served as a staple for many science fiction action stories. Patrick Mulholland takes a tried and true formula, enriching it with a sharp narrative that doesn’t give away too much too soon. What really stood out for me is that in writing out his story, told from Juno’s perspective, he doesn’t spend too much time explaining everything that’s going on. He gives the reader a little more credit, giving us room to discover the subtext out on our own. It’s a commendable trait for any writer, in any medium, resisting the urge to spell out the finer details.The writer knows his or her material top to bottom and inside-out, cuz it’s been percolating in the gray matter and begging to be poured out onto the page since inception, and has to keep himself in check or run the risk of giving away too much too soon.

In a comicbook it’s important that the writer has total faith in the artist, to present the visual cues that lead the reader along from point to point. No worries here since Mulholland is doing double duty on Zero Jumper. His artwork is crisp, the action flowing along in a very cinematic style that pulled me along from one panel to the next at a pace that’s almost infectious. Juno moves fast, and as you’re following along on her quest it’s easy to get caught up in the flow. Again, Mulholland shows us a lot, dropping visual cues for the reader to pick up and examine along the way.

Zero Jumper looks to be a great action story, with a plucky heroine on a mission to save the world. If there’s one downside to the title, it could very well be that it only has a four issue run. At this speed, that’s going to be over in a heartbeat.

Here’s a tip, though: take your time reading this title… I was a little rushed on my first read through and wound up missing some key points. It’s not hard to do, losing track of the details as you’re swept along at breakneck speed as Juno risks life and limb to achieve her goal. 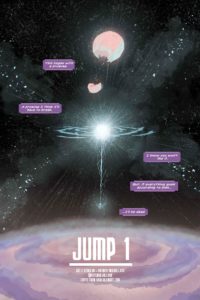 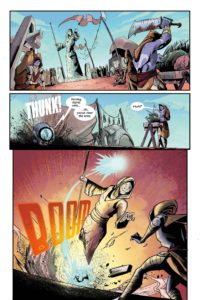