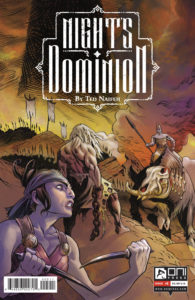 “The battle for the city of Umber has begun.”

A good creator will start a new book and by the end of issue #1 you will want to read issue #2. A great creator can still do this at issue #5. This is just a great fantasy story for those of you whose definition of fantasy is “something I used to read.”

I knew nothing other than the solicitation copy before picking up this issue, but I was familiar with Naifeh’s Courtney Crumrin (and you should be too) so I put on my game face and went in. There’s a little blurb to tell me who the major players are on the credits page, and we’re off to battle.

We start with politics, where the committee meets to select a new prime minister. (Note to TN: I see what you did there.) When one candidate is quite unhappy with the outcome, you know there will be a battle.

The members group, starting the issue separated into ones and twos within the city, all have their moments before they join together to battle the hordes of the undead. While some of her party may know, most of the city of Umber is surprised to find out that Emerane is also the legend known as “The Night.” She goes all River Tam on the armies of Uhlume, and it’s a beautiful if deadly thing. She is not alone, as more than one of the defenders has an Independence Day moment. There are some great dramatic notes struck, several moments that made me smile, and even an “Oh, I wasn’t expecting that.”

This is great fantasy storytelling without being bogged down in the heretofores and the akin-tos. It’s modern and often gritty without swearing or sex because it’s just not necessary to the story, kind of a relief for those of us who DON’T use profanity in their day-to-day vocabulary.

The battle isn’t won as the issue closes, but I know I’ll be hunting comic stores and con floors for the other issues to get this story in its entirety. 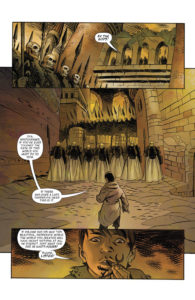 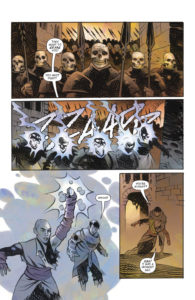 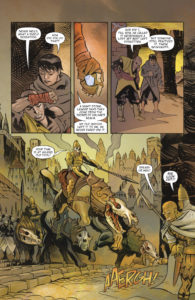 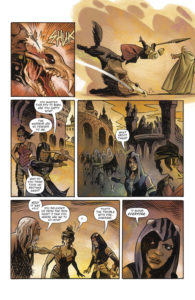