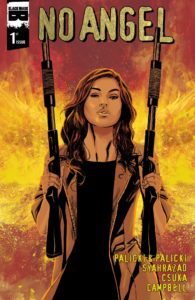 Religious texts from The Bible to the Sumerian tablets speak of strange creatures descending from the heavens and mating with humans, their children the superhuman heroes of myth. None of this ever meant anything to Iraq War veteran Hannah Gregory, until she found herself in the crosshairs of a dangerous cult convinced that she’s a descendant of these dangerous bloodlines… bloodlines they’re determined to eradicate.

No Angel is a cosmological and conspiratorial modern western in the style of Preacher meets The Da Vinci Code by way of Justified.
———-

Hannah Gregory has come back home to Tucker’s Mill, Wisconsin after a very long time away. After high school, she enlisted and served a tour in Iraq. After her military service, Hannah continued her service, this time as an agent for the FBI, and is currently assigned to their Chicago office. She didn’t have the closest relationship with her family, but did make a point to remember to call her father on his birthday. Sometimes she sent an email…

So it is with a certain sense of detachment that Hannah looks at the crime scene, her family’s home, where her father and brother were brutally murdered. Against regulations, protocol, and common sense, Hannah works the scene like she would any other. Her long-time friend, Deputy Sean Flynn, bends the rules to give her the access she asks for, even giving her the full case report and crime scene photos.

What follows resembles the opening act to your standard crime story, one that seems like it might roll into a high speed tale of revenge. Hannah attends the funeral, paying her respects as you’d expect, and goes to the wake accompanied by her friend Sean. She stands around, and there’s an impression that she’s ticking down the seconds to mark the minimum amount of time before she can take off. There’s some familial mingling, notably with her cousin Allison, who seems less interested in paying her respects to murdered family members than she is in flirting with Deputy Sean.

It’s when Hannah leaves the wake that the story starts to turn. She’s approached by an old friend of her father’s named Miriam Chapman, and during the introduction it becomes apparent that “friends” is the least part of the relationship. Miriam has a note for Hannah, who is understandably less than receptive to speak to or take anything from the woman who was having an affair with her deceased father, on the day of his funeral.

Being the curious sort, Hannah does retrieve the note, which says, “Genesis 6:4”. Looking up the reference, Hannah becomes more confused. The verse says: “The Nephilim were on the earth in those days—and also afterward—when the sons of God went to the daughters of men and had children by them. They were the he roes of old, men of renown.”

In the past, I’ve read many comics and books written by actors. Some have been decidedly better than many, so there’s almost a sense of hesitation when I see something that looks interesting, written by a celebrity. It’s nothing against them; it’s just that acting and writing are two very different skill sets, and there’s no guarantee that talent in one means talent in the other. That said, No Angel looked cool enough to encourage me to give it a read. Look at that cover… That’s Hannah standing there with two shotguns, looking badass as hell! Anyway, I’m very happy to report that there is some very smooth writing here, to support an interesting story premise. The Palicki brother/sister duo (Eric Palicki does have writing cred to his name, having worked on the Guardians of the Galaxy cartoon) have scripted some very nice dialogue, for characters that are showing the promise of depth and potential for growth. What’s more, the story is moving along quickly enough that it kept my interest, but it isn’t showing all of its cards just yet. Maybe it is just a well written crime story… but then what’s all that stuff about the Nephilim? Is it some kind of freaky serial killer thing?

Backing up the writing, the artistic team of Ari Syahrazad & Jean-Paul Csuka have created a world based in a moody, sort of noir reality. Their world is populated by people you could run into at the Piggly Wiggly (it’s a Wisconsin thing…), and has the look & feel of a chilly Mid West autumn. And if you think you recognize Hannah from the cover and inside the book itself, that’s Adrianne Palicki herself, Mockingbird on Marvel’s Agents of SHIELD, and the badass Ms. Perkins from John Wick.

No Angel is a story that looks to be revealing itself slowly but steadily, not giving too much away at once but dishing it out by the tasty spoonful. If you’re interested in crime noir stories with a touch of urban fantasy rolled in, this one turned out to be a find that I’m happy to have stumbled across. 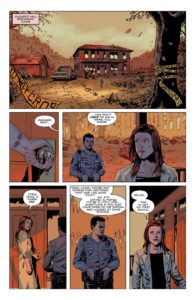 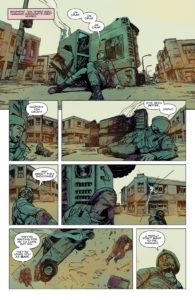 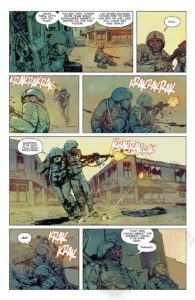