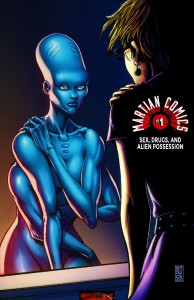 Sex, Drugs, and Alien Possession
Izzy Montoya — college student, disaffected, and possibly insane. She dreams of another life on Mars. Features the first three chapters of The Girl from Mars, plus The Galilean!
———-

Izzy Montoya is a dreamer, imagining an advanced civilization on the surface of Mars. Cities made up of incredible, physics defying architecture, hidden behind cloaking fields. A diverse global culture, dedicated to truly valuing the many differences among its people while still recognizing them as an all-inclusive whole. Izzy tries to pay attention to the world around her, to focus on her life, but this is the dream that she finds herself falling into, more and more.

The stunning realization Izzy comes to in the end is that these aren’t dreams she’s having… She’s actually reliving recent events in the life of the Martian girl she thinks she’s just been envisioning, just as this same Martian girl has been reliving hers. Both girls are very real, and both are seeking some kind of connection with the world around them. It just turns out that the world they’re seeking isn’t the one they were born to.

In The Girl From Mars, Izzy Montoya’s vivid imaginings are a byproduct of a process that’s been in use for thousands of years. In this process, Martians immerse themselves into the psyche of a chosen human being, slowly rewriting the person’s personality and thoughts with their own. Meanwhile, the human psyche experiences the same immersion in the Martian’s mind, seeing through their eyes as the two personalities merge. Izzy’s fascination turns into horror when the reality of the situation hits home… With the Martian tucked away in a gel-filled pod, connected to devices and feeding tubes to keep her body alive while her mind makes the transfer to her new Earthbound home, what happens to Izzy? She’s been living the Martian girl’s life, experiencing memories and emotions. So if it’s essentially a tradeoff, a swap, what kind of life does Izzy have to look forward to on Mars?

There are themes of existentialism deeply rooted in this book, and I’ve just tapped into the first issue of four that I was given for review. One chapter of the book even gives a glimpse of how far back these “visits” have been happening, proclaiming that Jesus was actually a Martian inhabiting the body of the Galilean, that the healing abilities and charisma of the religious figure were byproducts of the Martian mind being shoehorned into a mere Earthling’s meat suit. I’ll dip farther into the series, if for no other reason than to see how deep this religious iconography is going to go, and I’ll report back if it gets really crazy.

Cuz body hopping Martians out for a lark, taking over the bodies of people and living our lives behind our eyes isn’t crazy enough, right? 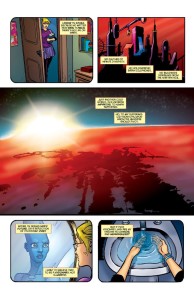 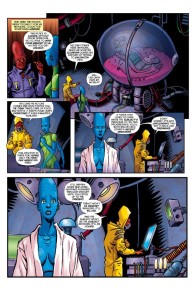 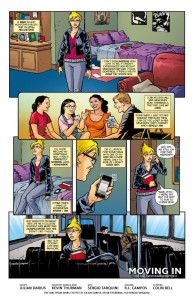