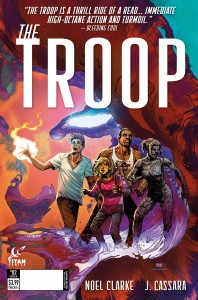 Torrent, a young woman who can turn herself into water and travel via people’s bladders! Hotshot, sex bomb and pyro-boy! Virus, a little girl who spreads disease like a plague louse! Superheroes with very little that’s super about them, they have been brought together by a mysterious billionaire who seems keen to protect them from an equally mysterious but far more lethal organization with big guns and cool suits.
———-

“The genesis of the Troop has begun. Three damaged, traumatized teenagers- Stephanie, AKA Terran; Janette, AKA Virus; and Philip, AKA Hotshot- have been saved from certain death by enigmatic billionaire Edward. But the black-suited killers who were hunting them down remain relentless in their pursuit…”

Tori Willis doesn’t really fit anywhere. She’s not super smart, not really a nerd, and definitely not a “gossip girl”. Her status as a member of the swim team is the only real thing to set her apart from the crowd, and she’s doing all she can to avoid that distinction. Her only real friend is Cynthia, another one of the cliqueless making their way through college. It was a shock, then, when Tori found Cynthia dead of an apparent suicide. Life moved on, and Tori continued to try and find her way through the maze of pitfalls that is campus life. Her attempts are further complicated by her secret… a secret revealed at a swim meet.

“Bob” also has a secret… He’s had a pretty peaceful life, his adopted mother and father showing him all the love and care he could have hoped for. Even so, he’s never fit in. At least not in a conventional way. “Bob” likes to fight… not just brawl, but fight. He spends his free time in alleys, basements, wherever he can find a completely unsanctioned fight to make a few extra bucks. And he’s good at it, which could work out in his favor as his secret brings tragedy to his family. “Bob” comes home to find his adoptive parents murdered, and his house surrounded by mysterious men in suits.

Meanwhile Stephanie, Janette, and Philip have their own issues to work out. While Stephanie remains loyal to a fault to the Troop’s benefactor and protector, Edward, Philip is starting to question the motive behind it all. As seems to be the growing theme here, Edward has secrets that he’s determined to keep. Philip, however, has his own ideas, and friction begins to grow… One of the aspects of this book that I like so far is the emphasis on the Troop’s pseudo family relationship, complete with all the dysfunction and conflict that goes along with it. This is made a little weird by Stephanie’s almost fanatical devotion to Edward, and the sexual nature that goes along with it.

The Troop debuted last month with a pretty strong story. I reviewed it (here), and found that the only real problem I had with it was where it jumps perspective, a switch between character POV that’s only marked by differently colored text boxes. Maybe I was expecting the jumps in this issue and was ready for them, or maybe the creative team is smoothing out the bumps already… Either way, the second issue seemed to roll along much more smoothly. Which is great, because this book has plenty going for it, and really needs to be read.

The writing from Noel Clarke is pretty sharp for someone fairly new to writing. His dialogue has a good rhythm to it, with each character keeping their distinctive “voice” throughout the book. At times, the witty banter might come along a bit forced, but for the most part it all comes together pretty well. And the story Clarke has concocted seems to be pretty deeply layered. There are… wait for it… secrets aplenty, tidbits lurking around the corner or just below the surface of the book, waiting to be given their Big Reveal.

The art by J. Cassara fits the mood of the book perfectly. His characters are each unique and identifiable, and the affects that come with their individual powers is pretty well drawn. What’s more, his action is direct and detailed, giving the reader a lot to look at, without muddying what’s happening on the page. So far, I haven’t seen one panel, particularly in the fight scenes, where a pose looks awkward or off-kilter… that’s a pretty huge problem with many new artists, but thankfully not one that Cassara seems to struggle with.

I have one complaint with this issue… “Bob”? Yeah, his name’s not “Bob”. I actually have no idea what his name is,so I guess he might be “Bob”, but despite being introduced as (presumably) a member of the Troop, his name isn’t actually ever mentioned. I read through the issue three times trying to find it, so someone please tell me if it’s in there.

All in all, I’m leaning more and more toward really liking this book. As it moves along, I’m hoping the story reveals can live up to the anticipation, and that the writing continues gather polish. The “good” definitely outweighs the “bad”. I like the slightly different angle being given to the well-used “super team” concept, that of the youngsters brought together and being almost forced into familial coexistence. It’s great that he’s been helping these kids and keeping them safe, but who is Edward? What’s he got going on? What are his motivations, aside from the obvious motivation of this older guy banging Stephanie? There are some definite shades of gray going on with this guy, so I’m not ready to look at him as the shining White Knight just yet. In fact, I’m gonna say it… The guy creeps me out. He’s no Professor Xavier, that’s for damn sure. 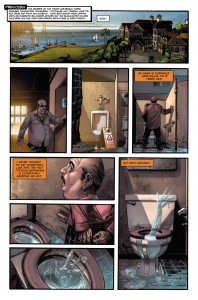 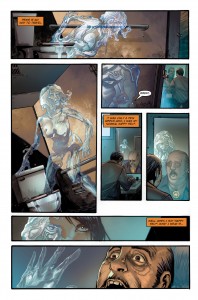 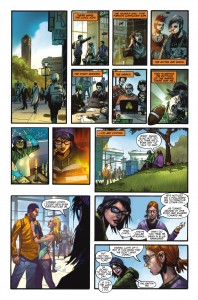 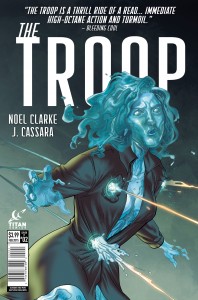