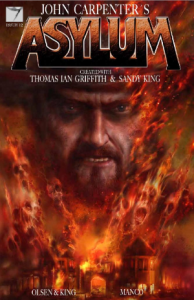 Like the layers of an onion left to rot, the mystery of Arlington’s lost children has peeled away its layers to reveal a bigger threat at its core. An ancient demon has been at work for decades only to be revealed when Beckett and Duran arrived in town. What was hinted at in Los Angeles is coming to fruition in this small midwestern town. King Leo has returned from the Barrens with new insights-and an adviser. Beckett and Duran are locked in a fight that challenges their new found abilities. Unless they succeed, all roads might lead to ruin. On a big, big scale.
———-

Let me start out by saying that this is NOT a jumping on point for this series… Issue 12 continues a story arc that starts out back in issue 8, so if you’re looking to get into this series (which I can say with confidence that I’d recommend to any and all horror fans) that’s where you might want to start. The beginning of the arc introduces us to Arlington, a nice and cozy looking little town with a deep and very dark secret. For over twenty years, boys have gone missing, and things have gotten worse. Former LAPD officer Duran and priest with an attitude Beckett have arrived to try and decipher what’s going on and bring an end to it. What they discover is a secret both deep and dark, involving the mother of all demons Lilith, and the coming of the Anti-Christ. Lilith and her followers are looking for the “pure innocent”, and when they find him they’re one step closer to Hell on Earth.

This series is as deeply layered and complex as anything you’re likely to find. The characters are anything but flat caricatures, carrying their baggage and issues with them from issue to issue like an infection you just can’t shake.

Duran’s life as a cop looks pretty plain and uneventful as he starts to get the hang of his powers of “discernment”. His role in the fight against all things bad? Basically, he stands out in the open, waves his arms around and attracts demons. When he sees them coming, he allows them to possess him and then digs in deep for all their secrets and weaknesses. Meanwhile on the outside, Beckett does his priestly duty and begins the exorcism. They’ve used this tactic to dig up a past series of events that’s as rotten as they come, and it’s led them to Arlington.

With some pretty twisted art, all shades of red, sharp teeth and claws, and things that squish, Asylum drags the reader along on ride to the Apocalypse… not the comic book character, or the movie villain who looks like a Power Rangers badguy, but the actual “end of days”. Evil is more than a concept in these pages, and it’s looking for tasty souls to munch on. Relief from this unrelenting spiral into depravity is some really nice writing from Sandy King and Trent Olsen. The dialogue between Duran and Beckett in particular bounces along with comic touches to lighten things up a little.

All in all, Asylum is a story that isn’t for the casual reader. If you haven’t gotten on board already, you’re going to have to put in some leg work (I sure as hell did…) before anything in this current issue makes sense. Once you get there, though, I think it’s worth it. We’re talking about horror from one of the masters of horror, with art and writing from a creative team that deserves association with that pedigree (not that Sandy King, Carpenter’s wife, has anything to prove).