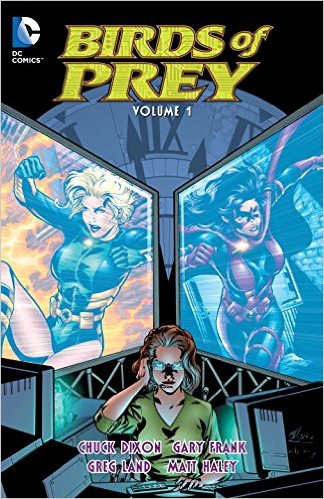 Birds of Prey Vol. 1
Writing:  Chuck Dixon, Jordan Gorfinkel
Art:   Gary Frank, Stefano Raffaele, Matt Haley, Wade Von Grawbadger, Dick Giordano, Greg Land,various
On Sale: Nov 4th
In BLACK CANARY/ORACLE: BIRDS OF PREY #1, BIRDS OF PREY: REVOLUTION #1, BIRDS OF PREY: MANHUNT #1-4, BIRDS OF PREY: WOLVES #1, BIRDS OF PREY: BATGIRL #1 and SHOWCASE ‘96 #3,  Black Canary invades Santa Prisca with the help of Oracle to stop a slavery ring, and pursues a felon with secrets that could be deadly; Oracle becomes Batgirl again to figure out a possible Arkham breakout, and more.
Collecting all the mini-series and one-shots prior to the Birds Of Prey ongoing series, this was originally in two trades released in 2002-2003 (along with BoP #1-6, not included).  This was the first introduction to the kick-butt team of women with Oracle (Barbara Gordon, former Batgirl) as the brains of the team, and Black Canary (Dinah Lance) as the muscle.  At first it was a one-time job, going after a bad guy with a soft spot for blondes.  Oracle has all the intel but was a paraplegic (from The Killing Joke); and Black Canary is out of cash, de-powered (The Longbow Hunters) and done with the Seattle, but ever ready to beat up bad guys as needed.  Both of these women had some rebuilding to do in their lives, and as they work together a trust begins to form.  This book focuses on their journey, even though Lois Lane, Lady Shiva, Huntress and Catwoman are brought into a few stories.  When Birds of Prey became an ongoing series, Huntress went on the  team full-time, with other heroines assisting.
At this point in his career, Chuck Dixon was pitch perfect for writing strong female characters, working his magic both on Birds of Prey and Batgirl; as well as infusing them into Robin, Nightwing, and Detective Comics.  He also wrote the Batgirl: Year One story.  His Oracle is working on her physical rehab while being the main tech support for anyone Bat-related; and his Black Canary was still making bad choices with the men she dated while remaining tough, idealistic and good-natured.  The world created here shows the growing bond between two women who need each other’s support, and by the time the chapter has closed they are a rock-solid team.
The art style was appropriate for the stories, starting a bit more gritty and getting smoother as the team found its groove.  Though each section had a different art team, the differences were not so big that the art called attention to itself. You don’t look at this book and immediately place it by the art style, which is a testament to each art team picking up something from the last.  While I only listed pencillers, there were just as many talented inkers and colorists making this collection a real treasure.
A sentimental favorite for this reviewer – my first real introduction to Black Canary and the Birds of Prey team, she quickly became my favorite DC character of all time.  Dinah’s ability to remain optimistic when  the chips are down and her innate strength make her a fantastic character, and never better written than by Chuck Dixon.  If you need to see why the fans complain about her characterization in any television adaptation of the character (except animated version), just read this collection.   It’s fantastic.
← Previous Post
Next Post →