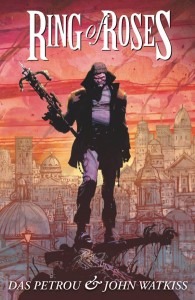 Ring of Roses (Titan Comics)
Writer: Das Petrou
Artist: John Watkiss
The iron-fisted rule of English Catholicism has made the London of 1991 a very dangerous place. On the eve of the Pope’s visit, murder stalks the sewers, the stench of political intrigue is everywhere and plague boils into the city, threatening it with a new Black Death…

With a dark, complex, many-layered plot and brilliantly brooding artwork, Ring of Roses is a classic historical thriller hammered from base metal into a golden, theologically twisted history.

The London of 1991, as it’s been concocted by Das Petrou, Trevor Goring, and John Watkiss, is a creation that would have made Orwell cry. Ruled by the Catholic Church, divided by Papal loyalists and supporters of Parliament, it’s not a happy place. The separation of economic classes is as profound as anything Charles Dickens could have put to paper, and on every page there’s a seething anger right below the surface.

Early on, we’re introduced to our co-protagonists, Lawyer Samuel Waterhouse and affable career criminal William “Bill” Barnett. Waterhouse is the kind of lawyer that we’d all want in our corner if we were in trouble, dedicated to his work and once he’s on a case he throws everything he has into it. Bill Barnett is the kind of friend you’d want in your corner if you ever found yourself in the middle of a bar brawl. There are two of the most unlikely allies you could think of, and to be truthful their paths don’t intersect very often throughout the story, but their paths are definitely two roads going to the same place.

The elements of this story, aside from the Orwellian/Dickensian mashup set in modern(ish) times, center around the question of loyalty to the Church, or to the State. The people of London are sharply divided, with the “Papists” seeming to come out in a growing minority. The Church obviously hasn’t been kind to the United Kingdom, and an impending visit from the Pope isn’t raising an ounce of goodwill.

As we go deeper into Ring of Roses, we’re given a lot of questions… With France at war with Germany, and Italy on the brink of joining in, is the world looking at its first World War? Why does Cardinal Mayhew (pretty sure he’s evil about two panels into his introduction) hire a lawyer, Waterhouse, to search for ten missing priests? What is the “ Silent Army”, and how is it linked to the Vatican? Oh, and what’s with all the dying rats coming up from the sewers and dying in the gutters?

Ring of Roses is one of those rare comics that, while you’re reading it, you’ve got the impression that it really should be something more than it is. Being as what it is, is a fantastically written, plotted, and drawn comic, that sentiment should by all rights move it into the realm of literature. As a novel, I could see this story being a deeply immersive read, with all of the characters layered into the narrative, intertwined so tightly that you really can’t even see it until you’ve moved on to the next plot twist. Apparently at one point there was a movie deal in the works, and while that might have been a huge win for the creative team behind the story, I’m not completely convinced that it would have held up given the mixed reviews of translated works like The Watchmen and V For Vendetta.

In my very humble opinion, Ring of Roses should be held up as is… It really is a great story, doing what all good writing should do, raising questions and posing some pretty disturbing parallels to the real world. As a comic, it all comes together into a very worthwhile work. I don’t know if it’s art, but I know what I like.