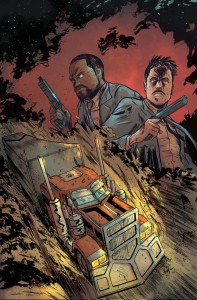 (Dark Horse – Cates / Johnson / Affe) For the world’s most valuable, dangerous, or secretive cargo, you don’t call just any trucking service . . . You call THE GHOST FLEET. When one of the world’s most elite combat-trained truckers takes a forbidden peek at his payload, he uncovers a conspiracy that will change his life forever! A new series of badass action on the open road begins here!

The premise alone for Ghost Fleet should be enough to get copies flying off of the shelves, but for those unaware of the particular premise; the Ghost Fleet is a big rig with an attache’ of protective escorts that hauls unknown and confidential payloads around the country undetected. While it hasn’t yet come fully to light just what this means, by the end of the first issue you’ll be wondering if it’s X-Files territory we’re plunging into, or something even darker. Without spoiling anything I can say for sure that the book is a page-turner that ensured issue #2 was on my pull list. I want to know more. I -need- to know more.

It isn’t surprising that a book of this quality should be coming down the pipes, given the creators involved. When you place two immense talents like Don Cates and Daniel Warren Johnson together on a project, you just have to know you’re printing money. Cates clearly established his ability to weave a strong and gripping narrative in Buzzkill, with elements of humor strewn throughout an otherwise gritty and darkly driven story. Johnson, likewise, has a harsh and stark aesthetic with lines other artists stay awake at night in envy of – a perfect compliment to Cates trademark tone. From his incredible work on Space Mullet (space-mullet.com) to his previous work on titles like the recently released “Speculative Relationships” book, Johnson proves he can match Cates blend of humor and grit in ways that makes the future of Ghost Fleet incredibly promising. It has a slick and heavy vibe with just the right amount of mystery in more than a few places – whether it’s the inherent intrigue of questions that arise in the course of what fundamentally sets off the action in the first issue, or the greater question afterwards of, “Whaaaaaaaaaat? What did he see?”

Pick up a copy of Ghost Fleet #1, and have your buddies grab a few copies as well and ask each other: What do you think he saw?