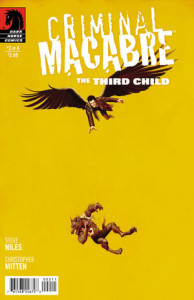 Monsters everywhere have gone insane, and Cal knows this is far from over. With the sorcerer Hemlock returned and seeking revenge, will Cal be able to battle both the monsters outside and the one within?

Bad things are coming, and Cal McDonald and his band of merry monsters are the only things standing in the way.

Vampires. Werewolves. Demons. Everything that has ever gone bump in the night is mustering behind fiend Jason Hemlock and the coming of the Third Child. Cal is on the move, trying his level best to head them off before they can carry out a feeding frenzy at a hospital. On the way, Cal finds himself reflecting on the changes he’s undergone, wondering if he’s always been a monster by nature and if his new form is just his outside catching up. He knows he’s a mess, claws, black wings, and bloodlust all rolled into a torn and conflicted package.

This isn’t a series for the faint of heart or the easily offended. It brings us creepy demon babies feeding on unsuspecting humans, children turning on their parents in the name of the Third Child, and hints of depravity to come. A gruesome package brought to us in an erratic art style that conveys the chaos of the story as it moves along at full speed. The writing is brutal and unapologetic, as should be expected in a book that’s leading us into a Hell unleashed on earth.

The book isn’t going to be for everyone. The lead character, Cal McDonald, is marginally likeable at best. The themes are dark, gory, and very often twisted like Celtic Knot. But beyond all of that, we have the classic flawed anti-hero seeking redemption through the careful application of violence… So long as Cal can keep that violence aimed at the right monsters, we should be okay.