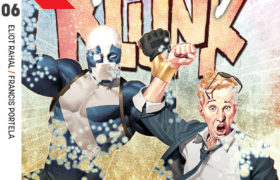 Valiant is proud to announce QUANTUM AND WOODY! (2017) #6 – the FIRST ISSUE of A PULSE-POUNDING TIE-IN TO HARBINGER WARS 2, Valiant’s seismic 2018 event! Klang, klang…klunk? When the lights go out across America, the world’s worst superhero team is going to finally find out if they have what it takes to be the heroes the Valiant Universe deserves! […] 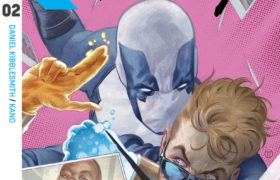 Valiant is proud to present your first look inside QUANTUM AND WOODY! (2017) #2 – the second sensational issue of the ALL-NEW and UNPREDICTABLE ONGOING SERIES by rising star Daniel Kibblesmith (The Late Show With Stephen Colbert) and eye-popping artist Kano (Daredevil)! On January 31st, the must-read superhero-action-family-drama-buddy-comedy throwdown of 2018 cries all the tears […] 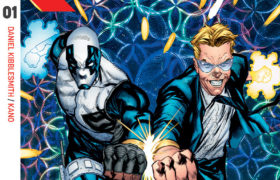 Valiant is proud to present your first look inside QUANTUM AND WOODY! (2017) #1 – the FIRST ISSUE of the ALL-NEW and UNTRUSTWORTHY ONGOING SERIES from rising star Daniel Kibblesmith (The Late Show with Stephen Colbert) and explosive artist Kano (Daredevil) with covers by astonishing artist Julian Totino Tedesco (Hawkeye)! In wake of X-O MANOWAR (2017) #1, […]

QUANTUM AND WOODY #12Written by JAMES ASMUSArt by WILFREDO TORRES, JOSEPH COOPER, and ERICA HENDERSONCover by TOM FOWLER (MAY141666)Beaten! Bloodied! Bamboozled!Quantum and Woody took the battle straight to the enemy – the mad-science cabal called Edison’s Radical Acquisitions and their mysterious, monstrous new leader – and the enemy kicked their ass! When these rogue biologists […]

QUANTUM AND WOODY #11Written by JAMES ASMUSArt by WILFREDO TORRES and ERICA HENDERSONCover A by KANO (APR141432)Cover B by WILFREDO TORRES (APR141433)Q+W=DEAD MEAT!The mad super-scientists of Edison’s Radical Acquisitions are BACK! Well…the ones who aren’t dead, anyway. (Or the ones who were dead and…uh, came back?) WHO?! is the mysterious new leader calling the shots? […]

Valiant is proud to present your first look inside Quantum and Woody #9, the FIRST ISSUE of“Crooked Lives, Present Tense” – an all-new story arc from award-winning writer James Asmus(Thief of Thieves) and superstar talent Kano (Swamp Thing)! There’s a new scourge sweeping the streets of the nation’s capitol – robots(!!!) – and Quantum and Woody are on the case! (Or at […]