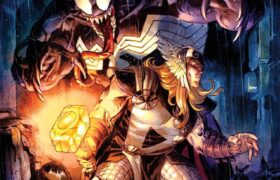 Two kings of the Marvel Universe will battle alongside each other to combat a new threat to Earth this July! Thor, King of Asgard, and Eddie Brock, the symbiote’s King in Black, will set aside any personal differences and join forces in an upcoming arc of Donny Cates and Nic Klein’s acclaimed THOR series. Beginning […]