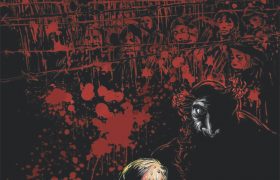 Kahttps://indyplanet.com/karikaturrikatur Written by Ken Cohen Art & Design by Graham Sisk After his anti-Semitic creation awakens in the modern day, an aging cartoonist is forced to confront his past and the dangers of propaganda. The majority of Karikatur is told visually, starting out in Nazi Germany with a young artist working on a Nazi propaganda […]