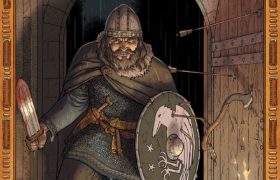 Heirs of Rome, Book One: Stormbringer Markosia Enterprises Written by Toni Karonen Art by Juuso Laasonen Edited by Ken Reynolds Available now! King Chlodio Long-Hair is assembling an army to invade Gaul. Alongside him is the greatest warlord of the Franks, who has a son named Rocco. Fifty years later he would be known as […]