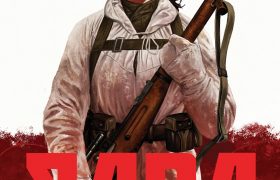 New from Titan Comics   Legendary British fighter ace, Johnny ‘Red’ Redburn, returns once more as the commander of the Falcons – a Russian fighter squadron battling the Nazis in the skies over Stalingrad. But dog fighting Messerschmitts is about to become the least of his troubles when the NVKD – the notorious Soviet secret police – […]