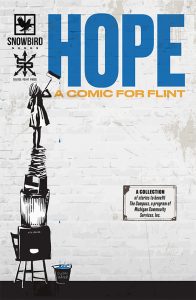 International touring musician and freelance writer Jonathan Diener has assembled a team of five writers and five artists from the Flint, Michigan area to create stories of hope. Not only will this be the first physical comic for the creative team, but also the first comic to help the city of Flint after the water crisis. HOPE: A Comic For Flint is an anthology comic published by Source Point
Press raising funds for The Compass, a program of Michigan Community Services Inc. aiding adults with developmental disabilities.

“I’ve been wanting to make a jump from music to comics for years, especially after seeing my peers like Max Bemis of the band Say Anything and former record label owner Matthew Rosenberg both writing for Marvel and making a big name for themselves,” said Diener. “My band, Baggage, has been raising money for the city of Flint through our releases, so it only made sense to do good for our city with my favorite medium: comics.”

Diener is no stranger to large-scale charity projects, after putting together the Not Safe To Drink music compilation which helped raise over $9,000 for the Flint Child Health & Development Fund. HOPE hopes to follow in the footsteps, creating buzz with a tangible item to not only raise funds for a good cause but bring attention back to a forgotten city.

“The Flint Water Crisis is something everyone has heard about, but we have yet to see a resolution,” continued Diener. “When we realized the millions of dollars being pumped into Flint from donations around the world were not necessarily going where it was supposed to, we decided to focus on underfunded nonprofits that could make a difference. We see what happens the second we hand over a check and that’s why working with The Compass
was a no-brainer.”

“I asked everyone to be a part of this comic because I loved their work, I knew they were driven and I wanted them to get a signal boost in something that can finally showcase their hard work,” said Diener. “It’s expensive and time-consuming to make a comic from scratch, but for a good cause, we all had the motivation to make it happen. It wasn’t about us anymore. It was about Flint.”

Source Point Press Art Director Joshua Werner adds “There’s beautiful work in this book, we’re very proud to be publishing it. And as a Michigan publisher who believes in giving back to the community, having an opportunity to play a role in helping Flint is something we couldn’t pass up.”

HOPE: A Comic For Flint will be released on September 1st at a release party and concert in Flint, Michigan at Foster Coffee Company. The bands performing (Copneconic, Baggage, The Apology Tour and The Dead Serious) all feature one creator of the comic. Doors at 6:30. All Ages. $10 admission gets you a copy of the comic.
FACEBOOK www.facebook.com/hopeacomicforflint
EVENT https://www.facebook.com/events/263344901108560/
TWITTER: www.twitter.com/jonodiener 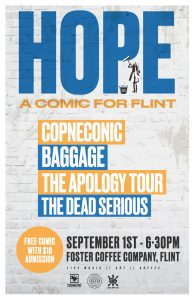