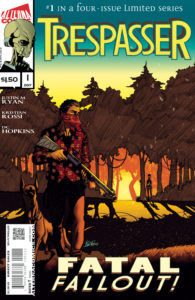 Everything Ends this December in Alterna Comics’ TRESPASSER

December 3, 2017 – The critically acclaimed mini-series TRESPASSER, comes to a thrilling conclusion this December at your local comic shop.

Written by Justin M. Ryan with art by Kristian Rossi and letters by DC Hopkins, TRESPASSER presents a suspenseful look at an isolated small family who are visited by an otherworldly—and very unwelcome—stranger. What follows is a pulse-pounding and tragically human tale.

In his debut series, author Justin M. Ryan tells the story of Hector Ramos and his daughter Maria who live in seclusion following an unknown global catastrophe. The two come into contact with an injured being in the woods—not an animal, but not quite human either. Unsure of what else to do they first to be helpful and tend to the trespasser’s wounds, but with no way to know the creature’s intentions, paranoia and panic begin to set in.

“The idea which became the basis for TRESPASSER bloomed from a mental image I had of an alien caught in a bear trap,” Ryan says. “The idea of a human finding a potentially deadly trespasser at their mercy was an interesting enough thought to me that I decided to expand on it. I particularly enjoyed writing an ‘alien’ story that fell well outside of the usual invasion set up.”

Accompanied by atmospheric, moody artwork from Kristian Rossi (Moonshine, Chambers, Miss Capi) TRESPASSER has been released in single issue format as part of Alterna Comics’ $1.50 newsprint initiative. The fourth and final issue will be released on December 20, 2017

“TRESPASSER is about xenophobia, and isolationism. Really though, it’s about family, a father and a daughter, and what they mean to each other — but it’s also about the end of the world and aliens with laser guns.”

Issues 1-3 of TRESPASSER are available now along with Alterna’s other $1.50 (or less) titles and can be found in comic shops, bookstores, and newsstands across the world. 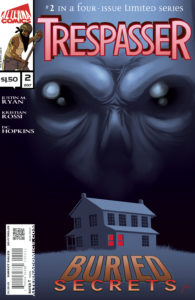 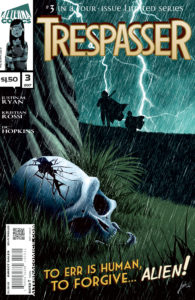 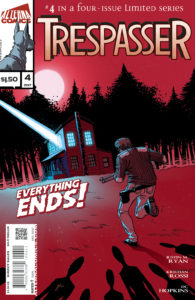