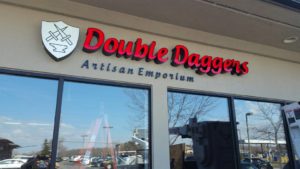 It’s always awesome when I get wind of a comic book shop in the area that I haven’t seen yet. So when a friend pointed me to Double Daggers Artisan Emporium, I was looking forward to our next run to CostCo (love that place!). While I wasn’t able to meet the owner, Keith Flores, during my visit, I did catch up with him through email and later by phone. We chatted, we bonded, we’ve sworn an oath of eternal brotherhood. That last part’s not entirely true, but I learned a few things that bumped Keith and his shop up in my already respectable estimation. He’s doing more than running a comic book shop here. He’s working on building a community through comics, games, and crafts. Keith doesn’t hesitate to point out that he is a veteran of the Army and served in Iraq. He’s also comfortable enough to state that he has been coming to grips with PTSD, and Double Daggers has played a large part in that.

From Keith’s website bio:
“Double Daggers Artisan Emporium represents a turning point in my life where I have returned to the things that I once had a great love for but in the intervening years had lost sight of. It is a place for my old friends to gather and enjoy themselves playing games or talking shop about comics. It is a place for me to meet new friends who share the same passions that I do. It is a place for me to continue healing and hopefully bring my experience to help other veterans who come in.

“DDAE is not just a shop, it is a safe place for “our people” to come to whenever they feel the need. I encourage all Veterans, nerds, geeks, misfits, comic junkies, rennies, game enthusiasts, and everyone in between to come visit and see what we have to offer beyond mere products. Come hang out with “your people” and bring your friends.”

Without a doubt, getting back in touch with something that you love, something that maybe you lost track over the years but are ready to come back to, is a great therapy in and of itself. The fact that Keith Flores has thrown himself headfirst into the realm of comics and gaming, and is making a living at it, is awesome. He’s putting a lot of emphasis on maintaining a family friendly environment, and if you look through some of the pictures on his Facebook page, you quickly see that this isn’t just some pretty words. There are regular game nights established, and at any given time you may find yourself walking into the middle of a heated Pokemon battle or Dice Masters tournament. And I couldn’t overlook the occasional celebrity guest appearance… I was a happily surprised to see that the indomitable Chalk Girl had paid a visit, having been a fan of her work since stumbling across her booth at Wizard World Chicago a few years back.

What’s more, Keith isn’t about keeping the limelight to himself. When I was speaking to him on the phone, he made sure to mention a few other local shops that deserved some mention. There’s Gravity Gaming Lounge in downtown Kenosha, WI, offering by-the-hour rental of computers and consoles for your gaming fix, and Not Your Parents Basement in downtown Racine, WI, offering a hangout for PC and console gamers as well as tabletop players.

Any one of these fun factoids would have been enough to pique my interest in Keith and the Double Daggers, but taken in combination it all made me really want to put the word out. So this is me, putting the word out. No go… out into the world (to Double Daggers) and reap that which I have sown.

And ask about the hand-made knitted C’thulu… he’s adorable. 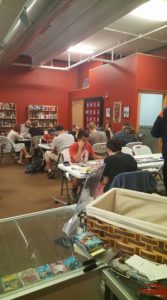 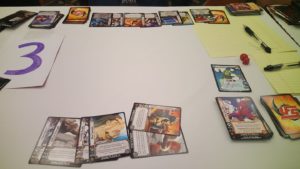 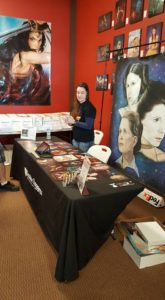