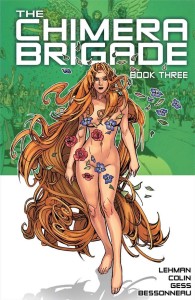 Venture inside the Burning Chamber!
Mythical beings have risen to power across Europe, and super-human activity is increasing around the globe!
War threatens to devastate the world once more as the manipulative M. plans to abuse the power of superscience.
But hope is not lost! Doctor Jean Séverac embodies a unique force: a force that could save the world – if he can embrace his surprising identity!
———-

Doctor Jean Severac, formerly a Lieutenant in the French Army during WWI, has problems… Caught in a bombing during the war, he spent over a decade in a coma, under the watchful care of Professor Marie Curie. Since waking, he’s been trying to catch up to the world around him, always wondering what happened while he was “away”, and trying to make sense of his dreams.

In the years before World War II, the world is a different place. There are heroes and villains with unimaginable powers, and all across Europe and the United States, they’ve drawn their lines and claimed their turf. Among them, not seen in years, are the Chimera Brigade: a group of four unique heroes, each embodying their own abilities. The winged Unknown Soldier and his flaming sword, embodying justice and loyalty. Matricia, the maiden who reveres and can control the metabolism of all living things. Dr. Serum, the skeletal figure able to sense and manipulate chemical structures. Baron Brown, a hulking and intelligent brown bear. Together they represent four distinct aspects of Dr. Severac himself… in his words, “Animal vigor, thirst for knowledge, loyalty, and love of life.”

I like this book. I just had a binge read, covering all three volumes put out so far, and I have to say that it works as an adventure, as a period piece, and as a psychological question on the unified nature of man (read your Jung… he’s mentioned several times in this volume). I’ve even taken a look at what some others have said about The Chimera Brigade, and although I made a comparison to The Watchmen in the heading, it mostly gets compared (very favorably) to the League of Extraordinary Gentlemen, and that’s actually pretty dead on. Where Alan Moore’s book covers figures of mostly British literature, this series takes a look at the pulp stories of Europe as a whole, and brings them into the same sort of share universe.

The writing is sharp, and the artwork is pretty fantastic. The whole thing is a very intelligent piece, bringing a lot of pretty disparate concepts together into the comic format. If you’re looking for more than tights and capes, this is definitely worth a look.