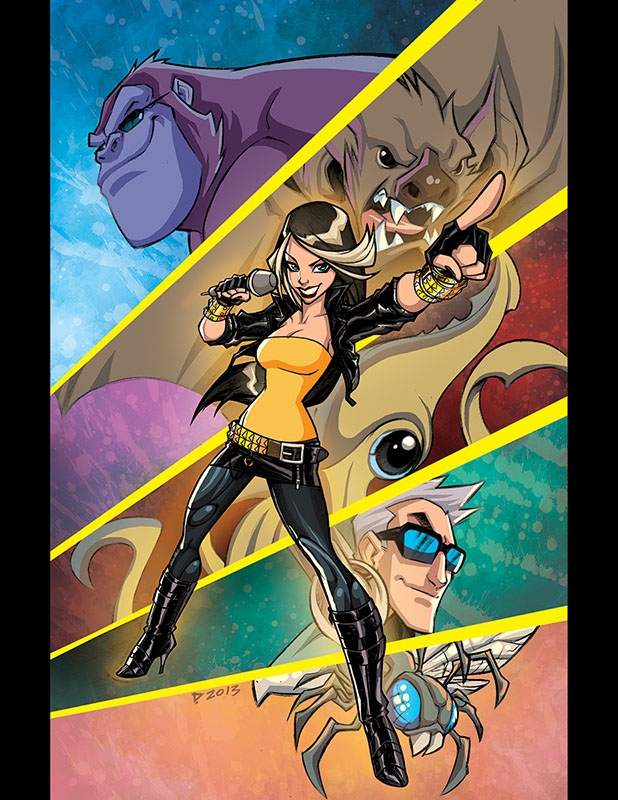 Arcana is proud to announce it’s coproduction with POW! Entertainment, LLC for the production and international distribution of The Unknowns, a new comic book universe.

Sean Patrick O’Reilly, CEO of Arcana, said, “Stan Lee was there when Arcana published our first comic book just over ten years ago.  To be working with him on a new intellectual property and creating a new universe has truly been a dream come true!”

Chris “Doc” Wyatt (Marvel’s Avengers Assemble, Napoleon Dynamite) has been at the creative helm at the project.  “Working with Stan and Sean has been fantastic. The Unknowns is Ben Ten meets Men in Black with a rock and roll soundtrack.”

Two average teens help alien protectors disguise themselves as a touring rock group in order to take out undercover cells of invaders.

Stan LEE, said,  “The Unknowns is an idea I’ve had for a while and bringing these characters to life with Arcana and Sean is exciting.  He’s created his own comic book character army and he’s kind of a Canadian version of me.”

“Working with Arcana is giving us the opportunity to bring new characters to the Canadian market while expanding POW! Entertainment’s worldwide franchise into a new territory,” said Gill Champion, President, CEO and Director, POW! Entertainment.

Arcana owns one of the world’s largest libraries of graphic novels and comics, with over 250 original intellectual properties, hundreds of graphic novels and a treasure trove of thousands of characters.  Arcana’s high quality branded entertainment is filled with characters and stories that transcend gender age, cultural and geographic boundaries.  Arcanamation is a full-scale animation studio with the creative and production capabilities to create high-quality branded entertainment with a focus on original content. The next generation of animated feature films and TV series are currently in production, led by a 13 episode series of Kagagi for APTN and followed by the animated feature filmPixies staring Christopher Plummer.

POW! Entertainment, LLC (“POW!”) is an American media production company formed in 2001 by Gill Champion, Arthur Lieberman and former Marvel Comics editor and publisher Stan Lee. POW! creates, develops, and licenses intellectual properties for traditional entertainment media, including: feature length films in live action and animation, television programming, merchandising and related ancillary markets. With high demand for content in media such as mobile applications, on-line, and video games, POW! has also expanded its focus to develop new material in these areas. The common stock of POW! Entertainment, Inc. is quoted on the OTCQB Market in the United States of America.