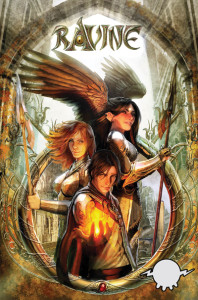 Ravine (Top Cow – Sejic / Marz)
Legend has it that long ago, an ancient spell almost splity the land in two, leaving an endless ravine in the far north of this world of fearsome dragons, stalwart warriors and scheming sorcerers. Now one man, Nebezial Asheri, driven by the deaths of his wife and daughter, wants to reclaim that magic and bring his loved ones back to life. But mighty forces align against him, as the hand of fate unites a band of wanderers and sets them to the destruction of Nebezial and his legions.

Wanderers. Nomads. Vagabonds. Call them what you will… They are the right hands of fate, destined, or doomed, to be the agents of change in the world. Nations have fallen as a result of their actions, crushed beneath the tide of the grand design. Admired, respected, feared, and hated, the emergence of a wanderer is never a slow news day.

Ravine is epic fantasy in every sense of the word. The scope of the story is baffling, and it’s by the benefit of good storytelling that it isn’t completely lost in a jumble. The world is a fully realized thing, and its cast of characters are as flawed and flawless as anything Tolkien could have come up with. These aren’t flat stereotypes, tossed against the wall to see what sticks. These are people with goals, responsibilities, hopes, and regrets. The fact that there are so many of them could be the most daunting aspect of reading their stories. George R. R. Martin couldn’t do it better.

The main antagonist, aka: “The Big Bad”, is an Emperor Palpatine of a guy by the name of Nebezial Asheri. Without a doubt, he’s a man of grand ambition and earnest intent. He’s not a dictator bent of world domination and the subjugation of everyone around him. He’s a husband and a father, mourning the deaths of his wife and daughter, determined to do anything and everything in his power to bring them back.

Standing in his way is a gathering of heroes and misfits, each and every one of them worthy of their own story. Stein Phais, a wanderer whose weapon carries a “grimlas avendati”, the spirit of Azriel Sanreya. Lynn de Luctes has recently gained the title of dragonrider initiate, flying into battle on the back of her dragon Hurricos, reluctant to acknowledge the burden of responsibility she knows is waiting for her. Soldier sorcerer Arianna Balthasar, devoted to the service of Palladia and loyal friend to Lynn, she represents the highest aspects of leadership despite or maybe because of crippling injury. The young dragonmaster Valerius Mordine, just coming into his power and struggling to ensure a place in Palladia where he can stay as close to Arianna as he can.

The list of names goes on. And on. I’d be here all day trying to introduce half of them, but I’m not going to do that. If I did, I’d never get to talk about the art… and holy crap is there art to be found here. Stjepan Sejic has talent seldom seen in the comic medium. His backgrounds are as rich and detailed as anything I’ve ever seen, but it’s in his characters that he shines. Each character’s individuality isn’t just about the color of their hair or the clothes they wear. Sejic shows it in their body language and facial expressions. If the story were completely unreadable, I think I’d be happy just to sit and look at the pretty pictures. Fortunately, the story is very readable. Having worked together as the creative team on other Top Cow properties (Witchblade, most notably), Sejic and co-writer Ron Marz have put together a work of original art, through and through. I can’t imagine it getting done any better than this.

Ravine might not be a new release, but it was new to me and after reading it I had to put it out there as something very cool. I’m a total fanboy on this one, so I apologize for the gushing post on an older book.