Below is an open letter from Onrie Kompan, creator of Yo Soon Shin series – which is some of the best comics I have ever read – and far and away the finest historic comic around!

Check out the official page!

It is my honor to announce the following–

This was all done with extremely limited distribution but not without the help of retailers across the US who support independent comics and believe in our series.

In celebration of this magnanimous feat, these first three issues will soon be available for you to read anytime you want for FREE through Freedable Comics as soon as the site launches later this month! If you like, send your friends and loved ones to the site to read these comics and more!

I would like to thank all of you for supporting YI SOON SHIN over the years. This is not just a victory for my creative team and I–it is a victory for all of our readers. We really wouldn’t be here if it wasn’t for you.

Last week, the creative team wrapped up production on YI SOON SHIN: FALLEN AVENGER #3, which will be premiered at C2E2 in a few weeks. You can check out the latest trailer for it below.

I would like to share something with you that I’ve chosen not to disclose for some time. Despite the fact that YI SOON SHIN has sold out from convention to convention, the fact of the matter is that the book has not turned a profit. All the money that I have earned at conventions over the years has gone right back into our grueling production process.

It goes without saying that as an independent comic, we are up against all odds when it comes to building out this series. If I am not around to push it, there is no driving force behind our sales. This is a challenge that many independent publishers face. Distribution is incredibly difficult in the comics market, which is primarily driven by monthly titles.

YI SOON SHIN is not a monthly title. It is a book that comes out when it’s ready. Over the years, my team and I have striven to provide you with an immaculate comic that is worth your time and hard earned money. We don’t do filler issues and we don’t do variants. All we can offer you, all we will ever offer you, is our best work

5 months ago, my primary source of funding for YI SOON SHIN fell through and a few weeks later, an ongoing deal I had with a Korean publisher to release a translated edition of the graphic novel also fell through, which forced me to rethink my ongoing strategy.

Needless to say, YI SOON SHIN was given a death sentence.

418 years ago, Admiral Yi himself stood before his men during Korea’s darkest hour. Facing near impossible odds against the invading hordes of Japan before the Battle of Myungnyung, he bravely stated–

Korea won that battle. 12 ships took on an armada of over 300 Japanese ships and brutally defeated them.  The odds were not in Korea’s favor 418 years ago and they are not in our favor in today’s comics market. Regardless of the challenges that lie ahead, the YI SOON SHIN Team will win the battle to keep this book in production so long as we have your support!

After 7 years of sacrificing financial stability for this book, I am more determined than ever to finish what I’ve started. As the architect of this project, I promise you that I will see this vision through to its end. No matter what the cost. I will never abandon this book. This is my solemn oath to you.

On April 24th, 2015, we will be launching a Kickstarter initiative for YI SOON SHIN: FALLEN AVENGER #4. We will be attempting to raise money to fund production for the 48 -page conclusion to the second arc of our series. Anything we raise beyond our goal will be used to fund the production and printing costs for the FALLEN AVENGER graphic novel as well as the third and final arc of the YI SOON SHIN Trilogy.

Whether you’re a fan of the single issues or holding out for the next hardcover, it is in your best interest to be a part of this.  We promise to make it worth your while and are working very hard right now to provide you with rewards that are worth your time and hard earned money.

Help me achieve a victory for this series as well as all independent comics by being a part of finishing what we’ve started! I will post a link to our Kickstarter campaign as soon as it goes live in a few weeks.

Until then, please spread the word. Tell everyone you know about this series. Tell them about the international team of artists that have poured their blood, sweat, and tears into this comic.  Tell them that we will not give up until this series is finished! 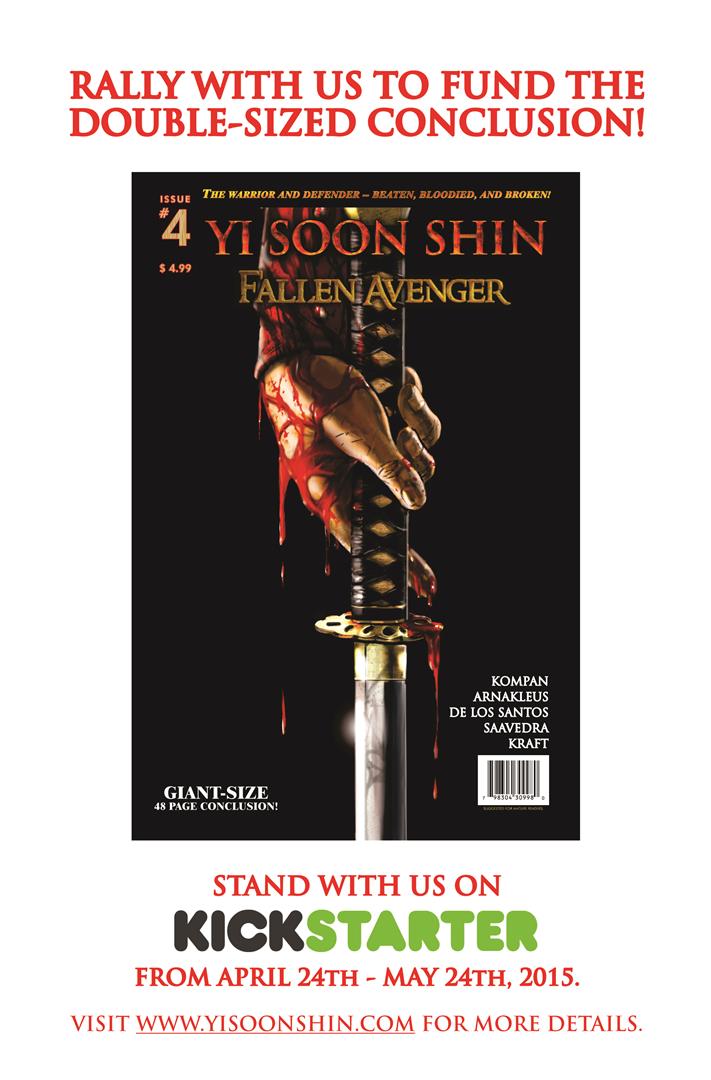