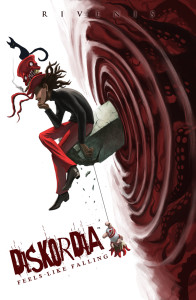 Diskordia (Rivenis – Blackman)
‘Everything you think you know about the world is at worst a lie and at best simply a pale facet of a truth so terrifying and overwhelming that madness is preferable.’

Diskordia is a dark surreal fantasy tale that follows a socially maladjusted young man called Jackal Black as he tries to get through the process of living as quickly and painlessly as possible. This is not meant to be however as he finds himself falling through the dividing line between the top layer of reality and what lies beneath. The story is told in equal parts hilarious black comedy and dimension warping surreal horror as he encounters a face of the world that most of us can only dream of.
——–

The adventures of Jackal Black and Squid Girl… Seriously, her name’s “Squid Girl”. I think. Assumptions are a tough call to make this story, and not just because an assumption “makes an ass of ‘U’ and umption“. This book unfolds like a stream of consciousness, the only linear things being the panels the artwork is barely constrained to.

We start with Jackal as he makes his way through what we are led to believe is a pretty average day. On his way to the community college he attends, he picks up his pharmaceutical reality killer for the day. Once he gets to his college, he’s accosted by the local bullies who are hitting him up for some hash. From there, Jackal winds up in the women’s bathroom, where he meets a woman tidying up after a murder… the victim of which has been shoved into one of the stalls, a janitor’s nightmare of a mess the stark harsh to Jackal’s buzz. When the police are heard outside the bathroom door, demanding Jackal give himself up, his only escape is down the rabbit hole. But in the mind of Diskordia’s creator, Rivenis, the rabbit=toilet and hole=bowl.

Where chapter one introduces us to Jackal and Squid Girl, chapter two breaks the narrative style and opens up with the first-person prose of a reporter named Cutter. He’s on his way for the interview of the century… no, not the movie that pissed off North Korea. Cutter is going to interview Iverna Deskerna, the mysterious head of a multinational corporation who’s rarely seen and even more rarely spoken to by anyone outside of her circles of the rich and powerful. Iverna D, and she likes to be called, promises to show Mr. Cutter a world equal parts science fiction, nightmare, and dark fantasy. From here on out, the story bounces from place to place, switching between Jackal’s and Cutter’s tales without warning.

To use words like “twisted”, “dark”, or “surreal” would be a complete disservice to Diskordia and its creator. Rivenis has concocted a slow motion psychotic break, in Technicolor. This book absolutely will not be for everyone, and is definitely not intended for the young and impressionable. What I feel pretty confident about is that if you decide to dip into Rivenis’s world, you won’t take away from it anything remotely resembling what the next person might. There’s so much left to interpretation here, so much that’s left open and undefined, that I have no doubt different people will confidently describe different stories. It might piss you off, it might disgust the more conservative, but I don’t think there can be any doubt that it’ll give you something to think about. For better…….. or for worse.
——–

A definition of sanity: “The tacit agreement of a society to believe in the same delusions.”– Source unknown 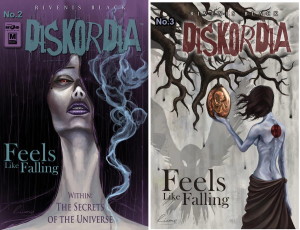 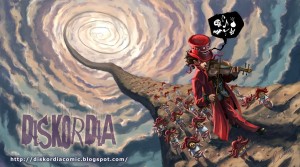