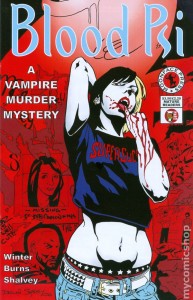 Written by: Andy Winter
Art by: Keith Burns
Cover by: Declan Shalvey
Vampire one-shot featuring interior art by Dynamite artist Keith Burns and a cover by Marvel artist Declan Shalvey.
When her best friend in the capital’s close-knit vamp community is murdered, Ruby vows to track down the killer – but the hunt may just unearth painful memories from Ruby’s human past she hoped would remain buried forever. A must for fans of Buffy and British TV’s Ultraviolet.

Originally released in 2007, this one-shot has had a rough go of it. As a single issue comic, it apparently did just fine. It sold some copies, it picked up some fans, and it even got the attention of Hollywood as a possible movie. Now, as it’s getting picked up by ComiXology to be distributed again, maybe the old momentum is still there. I hope so because in a market glutted on angsty vampire fluff, Blood Psi manages to bring something different to the table.

Ruby is a vampire. She doesn’t sparkle. She doesn’t spend her days bemoaning her existence as a member of the Damned. She doesn’t even sit around sipping at champagne glasses of blood, posturing and posing like something out of an Anne Rice book. Ruby parties. She drinks. She hangs out with friends, both vampire and mortal, and even catches the occasional concert. Things aren’t always easy for a vampire in London, but aren’t things tough all over?

And then a friend of hers, another vampire, is murdered in grisly and spectacular fashion. The vampire community gets together and come to the conclusion that a vampire hunter has arrived in London. Ruby goes on the hunt to find the killer before more blood gets spilled.

There’s a lot going for this book. First of all, a great job was done in establishing a pretty cool protagonist, who lives in a pretty well thought out world. Sure, it’s London, but it’s a vampire London and the gold is in all of the details. That’s not an easy feat in a one-shot story. The artwork, no-frills black and white inks that do a good job of using the contrast to reveal just enough without overloading the page, moves the story along very well.

This is one that I’d like to see more of. Hopefully it catches the wind and takes off this time around. Enjoy.