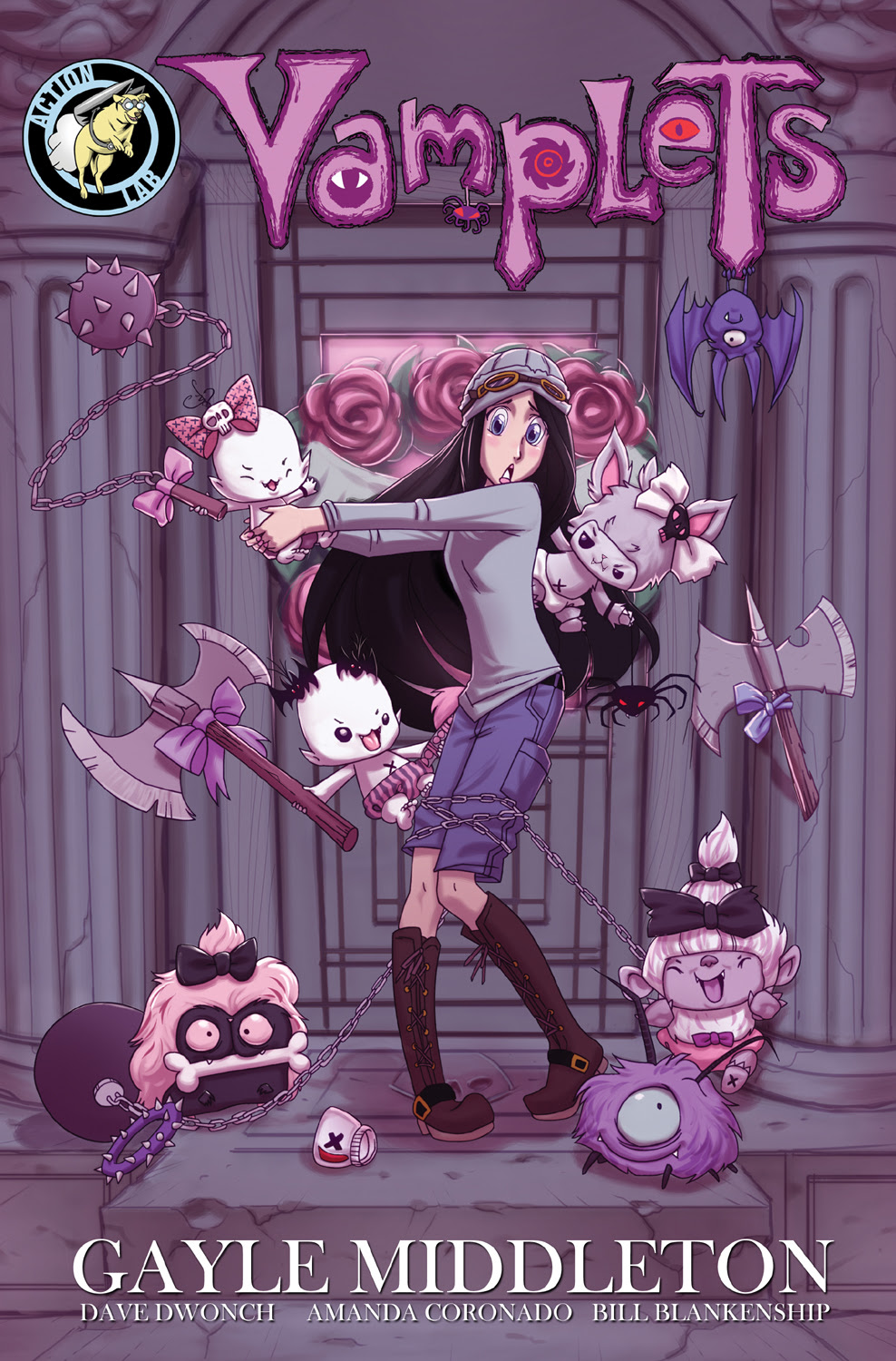 VAMPLETS: THE NIGHTMARE NURSERY IS FREE ON COMIXOLOGY!
Gloomvania’s littlest bloodsuckers first OGN is now free for a limited time!

PITTSBURGH, PA- Action Lab Entertainment is proud to announce that they are offering the first volume of VAMPLETS: THE NIGHTMARE NURSERY for free on Comixology.com! Starting today untilSeptember 5th, 2014, you have the opportunity to pick up the first issue of Vamplets: The Nightmare Nursery for free! Recently featured on The View, Vamplets is a modern fairy tale filled with monsters, mayhem, and magic!Created by Gayle Middleton, the talented artist responsible for the redesigns of My little Pony and Littlest Pet Shop for Hasbro, Vamplets is the story of teenager Destiny Harper. With graduation coming and zero prospects for the future, Destiny is at a crossroads in her life. Answering an ad for “The Night Care Nursery” seems like a great idea, until she is magically transported to Gloomvania, where dark creatures lurk the streets, and the world is being mysteriously overrun by baby vampyres called Vamplets! Can Destiny serve her term as Governess of “The Nightmare Nursery” and return home? Fairy tales get a modern update in this coming of age tale of monsters, mayhem, and magic!You can download VAMPLETS: THE NIGHTMARE NURSERY for free on Comixology.com.Vamplets: The Nightmare Nursery is in stores now,  Diamond Item Code: AUG130915, Volume Two is scheduled for a August 2014 release and is available for order, Diamond Item Code: AUG130915.
ABOUT ACTION LAB ENTERTAINMENT- Formed in 2010 with the purpose of pooling their collective talents into a single, powerful entity, the members of Action Lab Entertainment have countless years in multimedia publishing, design, and business.  Their first release, Fracture, was successfully funded through Kickstarter and since then they have continued their mission to produce high quality, genre-spanning entertainment.  Since its formation, the accolades for A.L.E continue to build on a daily basis.  Among its more popular titles are all ages material like the Eisner, Glyph, Shel Dorf Award nominated series PRINCELESS, NFL RUSHZONE (based on the Nickelodeon Television series), Jamal Igle’s MOLLY DANGER, Artist/ Writer Jeremy Dale’s hit series SKYWARD, and Gayle Middleton’s (My Little Pony, The Littlest Pet Shop) monstrously adorable VAMPLETS. Action Lab’s Mature Readers imprint ACTION LAB DANGER ZONE continues to push the envelope of comics entertainment with titles as varied as EHMM THEORY and Dan Mendoza’s over the top horror-comedy ZOMBIE TRAMP, THE FINAL PLAGUE and BO, PLUSHY GANGSTA.