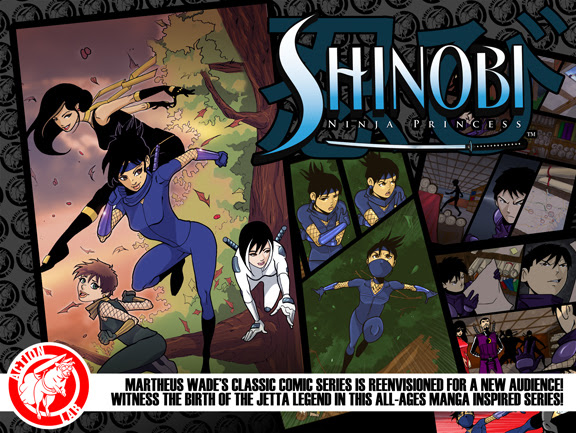 Shianndrea Toshigawa is just your average, ordinary ninja -in -training. On the run from her father, the Emperor Terminus and the Azumi ninja clan, Shianndrea trains with the legendary Toshigawa clan to embrace the mysterious power within her. Shinobi: Ninja Princess, (a six issue comic book series) is written, illustrated and created by mastermind Martheus Wade. A prequel to Wade’s most famous creation ‘Jetta: Tales of the Toshigawa’, Shinobi; Ninja Princess explores her formative years as Shianndrea struggles against her destiny as well as being a teenager. The all ages action/adventure series takes a manga inspired spin on this classic coming of age story and returns to a universe of warring clans, futuristic intrigue and high adventure.

Wade’s approach is accessible to readers who may cross over from that realm but it manages to stay just light enough to attract the casual reader. Wade, who’s work has been featured in graphic novels like ‘Nanovor’ and ‘The Bad Girls Club’ for IDW publishing, is joined by his wife and frequent collaborator, Janet Wade (Jetta: Tales of the Toshigawa, Princeless: Short Stories for Warrior Women) and features a variant cover by Tressina Bowling (Hateink , Princeless: Short Stories for Warrior Women).

ABOUT ACTION LAB ENTERTAINMENT- Formed in 2010 with the purpose of pooling their collective talents into a single, powerful entity, the members of Action Lab Entertainment have countless years in multimedia publishing, design, and business. Their first release, Fracture, was successfully funded through Kickstarter and since then they have continued their mission to produce high quality, genre-spanning entertainment. Since its formation, the accolades for A.L.E continue to build on a daily basis. Among its more popular titles are all ages material like the Eisner, Glyph, Shel Dorf Award nominated series PRINCELESS, NFL RUSHZONE (based on the Nickelodeon Television series), Jamal Igle’s MOLLY DANGER, Artist/ Writer Jeremy Dale’s hit series SKYWARD, and Gale Middleton’s (My Little Pony, The Littlest Pet Shop) monstrously adorable VAMPLETS. Action Lab’s Mature Readers imprint ACTION LAB DANGER ZONE continues to push the envelope of comics entertainment with titles as varied as EHMM THEORY and Dan Mendoza’s over the top horror-comedy ZOMBIE TRAMP, THE FINAL PLAGUE and BO, PLUSHY GANGSTA.