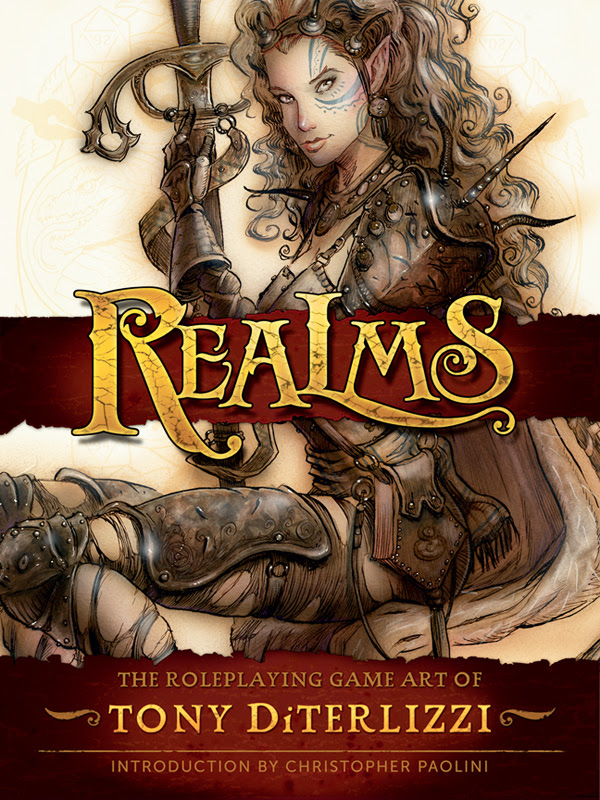 Known for his distinctive style depicting fantastical creatures, horrific monsters, and courageous heroes, DiTerlizzi’s illustrations reshaped and defined the worlds of Advanced Dungeons and Dragons, Planescape, and Magic: The Gathering in the imaginations of legions of devoted roleplaying gamers during the 1990s, before he transitioned to children’s book creation. Among his most renowned works are the chapter book series The Spiderwick Chronicles, a literary phenomenon which has sold millions of copies and has been translated into 30 languages. In 2008,Spiderwick was adapted into a successful feature film by Paramount and Nickelodeon Pictures. Tony also wrote and illustrated the WondLa trilogy, Ted, Jimmy Zangwow’s Out-of-this-World Moon Pie Adventure andThe Spider and the Fly – the picture book for which he received the Caldecott Honor, one of the most prestigious awards in children’s publishing.  DiTerlizzi currently has over 12 million books in print worldwide.

REALMS will be filled with hundreds of illustrations reproduced from the original art, unpublished sketches, and photographs from DiTerlizzi’s archives. In addition, DiTerlizzi will be creating a number of new paintings exclusively for this edition.

Along with commentary by the artist, Christopher Paolini (Eragon) provides the introduction while seminal figures in fantasy – such as  Guillermo del Toro, Brom, Jane Yolen, Holly Black, Zeb Cook, Jeff Easley, and Donato Giancola, among others – provide personal appreciations.

”There is no question that the work I did in gaming early in my career shaped me as an author and illustrator for children,” says DiTerlizzi.  “In RPGs, I was not just tasked with illustrating a character, but also the artifacts they use, the armor they wear, the places they inhabit and the monsters they vanquish. It was my introduction to worldbuilding and an experience I will forever cherish.”

“Dark Horse has been fortunate enough to work with some of history’s greatest artists” said Dark Horse president Mike Richardson. “I am excited to add Tony DiTerlizzi’s name to a list that includes the likes of Mike Mignola, Frank Miller, and Geof Darrow.”

“Tony was one of the most respected and well-known names in gaming when he made a risky decision to make the leap and pursue his lifelong dream of illustrating books for younger readers,” says Kitchen Sink Books co-founder and REALMS editor/designer John Lind.  “His unique artistic style and success in that genre is a tribute to his roots in gaming. For fans of his work, REALMS is a dream project and one that we’ve spoken about assembling for years. We’re thrilled to finally make this book become a reality—we hope fans will feel the same!”