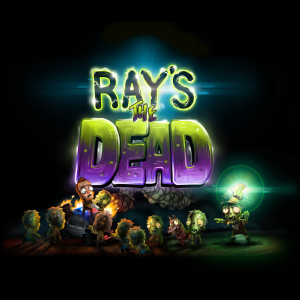 “In Ray’s The Dead you take on the role of Ray, the newly arisen zombie! In this single player, story driven Action-Stealth-Puzzler, join Ray as he makes the most unlikely friendships and builds a diverse zombie army on his quest to find out how he was killed, why he was resurrected, and most curiously, why this giant bulb is sticking out of his head! It’s 80’s setting evident in every last detail, Ray’s the dead will take you on a quest unlike any you’ve seen before!”

So, why should I care?

What, do you have something against fun? Seriously, the premise alone gives the game the kind of versatility that should appeal to a wide audience; whether you are in it for the stealth and strategy and puzzles, the direct action, or just looking for a good story – It has something to offer.

Personally, I like the new take on the “Pikmin”-esque mechanic. You play as Ray (obviously), but he’s not alone in his quest: You’ll accumulate an army of undead under your command that you can use in varying capacities (depending on the type of zombies you make out of the once-living, so keep your eyes peeled for the right “material”!). Each zombie type has a unique skill set that you can use to your advantage.

Ok, I’m listening. What’s it about?

Set in the 80’s, you play as Ray. Ray is dead. Sort of. Ray is un-dead. Why is Ray undead, and why does he have a giant lightbulb sticking out of his head? Well, the story surrounds not only Ray’s journey to find his place in the world as a zombie, but you also get to play through his life-before-death through playable flashbacks (via interactive storytelling elements).

What can I play it on?

You can crank out this bad boy on PC, Mac, Linux, and PS4!

You got this far in and you don’t even like zombies? Get outta here kid, you bother me.

Ok, ok, slow down. Why should I give THIS zombie story a try? I’m scared to trust again.

Well for starters, you actually get to play as the zombie for a change. You experience life on the other side of the chain-link fence! And that’s not all, as mentioned you don’t just play as Zombie Ray – You create an army out of a variety of unique zombie types to help you succeed in your journey! Ragtag Studio put it best when they said “You know all the classic moments you’ve seen in all your favorite zombie movies? Zombies streaming out of the forest to surprise the poor innocent humans. Zombies crashing through the windows, shocking the passerby? You have the pleasure of recreating all those moments in Ray’s the Dead!”

Why should I back it now, instead of just buying it later?

Well, without your help, many projects won’t make it past Kickstarter – Sure some might, but it could take years longer. Just think of it like a pre-order with some awesome perks!

Check them out for yourself, here!

Be a part of the game!

Get an early bird discount!

Ok, I’m in. Hit me with that sweet, sweet Kickstarter link, boyeeee.

That was a weird thing to say. Now we’re both uncomfortable, but here’s the link, anyways:

Ray’s the Dead on Kickstarter!