Heavy Metal and Asylum Press join forces to create horror and sci-fi extravaganza for issue #271 of the World’s Greatest Illustrated magazine Frank Forte, Publisher at Asylum Press, named guest editor for Heavy Metal #271, gathers together a worldwide talent base to create this astounding issue of horror, science fiction humor and erotica Aug. 19, 2014 – Los Angeles, CA -Heavy Metal and Asylum Press have joined forces to bring you Heavy Metal #271–The Asylum Press Special!–a sci-fi/horror spectacular that is sure to erupt your deviant mind.  Featuring all new stories from the Asylum inmates: Steve Mannion (Fearless Dawn, Fear Agent) delivers a nod to Moebius in Prayer… a Fearless Dawn yarn, William Broad gives us Priests of the Black Death where an order of the Templars has become corrupt and power hungry…for satanism and witchcraft! Dwayne Harris (Black Powder, Amnesia) serves up the post apocalyptic action thriller Dangerous Curves. Frank Forte and Tim Vigil (Faust, Gothic Knights) drops a sick and twisted tale entitled Allison, David Hartman (Phantasm V, Transformers:Prime) delivers a short horror story entitled Pond Scum where hillbillies hunt for an illusive bog creature.  Hilary Barta churns up an EC-styled sci-fi/horror piece called Evaluation, Robert S. Rhine (Girls and Corpses) and Frank Forte (Asylum Press) knock out a tale of crazed sideshow freaks tabbed Separation Anxiety, Elizabeth J. Musgrave (Hell Comes to Hollywood, Farmhouse) conjures an erotic robotic thriller LUST, Lingerie and Diodes!.  Mutation is a tale of demented sex in a post-nuke world by Forte and J.C. Wong. Royal McGraw and Adauto Silva invoke Feast, after the zombie apocalypse, cities have been rebuilt… and restaurants have opened. One chef must prepare a very special meal. Comics from a cast of international talent that includes: In The Green Fairy, by Jason Paulos (EEEK!), Struggling artist Anton Goffroy finds heaven and hell in the arms of a mysterious sorceress!, Swamp Girl takes us back to a barbarian era where a young girl finds more than she’s looking for in a watery hole of horrors, by Frank Forte and Fabio Nahon, , Warlash by Nenad Gucunja (Undead Evil), Sacro Profano by Mirka and Mother by Mark Covell (Family Guy, Satan’s Circus of Hell).  Gallery sections include concept artist Ben Olson (The Suffering, Area 51:Blacksite) and fine artist Dave Lebow (La Luz De Jesus Gallery, Dexter TV series).  This issue is sure to please fans of the dark, the psychotic and the horror.  Beautiful cover art by none other than the U.K.’s own Aly Fell (Zombie Terrors, Imagine FX). “I’m excited to have been able to put together one of my favorite magazines,” explains guest editor Frank Forte, “everyone worked really heard to deliver an issue of Heavy Metal that will be sure to please fans old and new.” David Hartman took a break from directing Phantasm V: Ravager to complete an all-new 4-page horror story entitled Pond Scum for the issue. David says, “I grew up with Heavy Metal. I would study the art in them for hours upon hours and there was nothing else like it out there. It was a big part of my childhood and I am honored to be a part of the magazine now.” Dwayne Harris, who recently optioned his graphic novel Amnesia (Arcana) to Sony, completed the short story Dangerous Curves for this issue.  Dwayne explains, “I’m thrilled to be in Heavy Metal.  In “Dangerous Curves”, a Mad-Max flavored story, the twists aren’t just in the road.” When asked for a quote, the hard working Steve Mannion said only, “I want to be in that book!” Heavy Metal #271 can be pre-ordered at your local comic store during the month of August. Just use Diamond Ordercode: AUG141519. The issue will be on sale at newsstands early Oct. 2014. 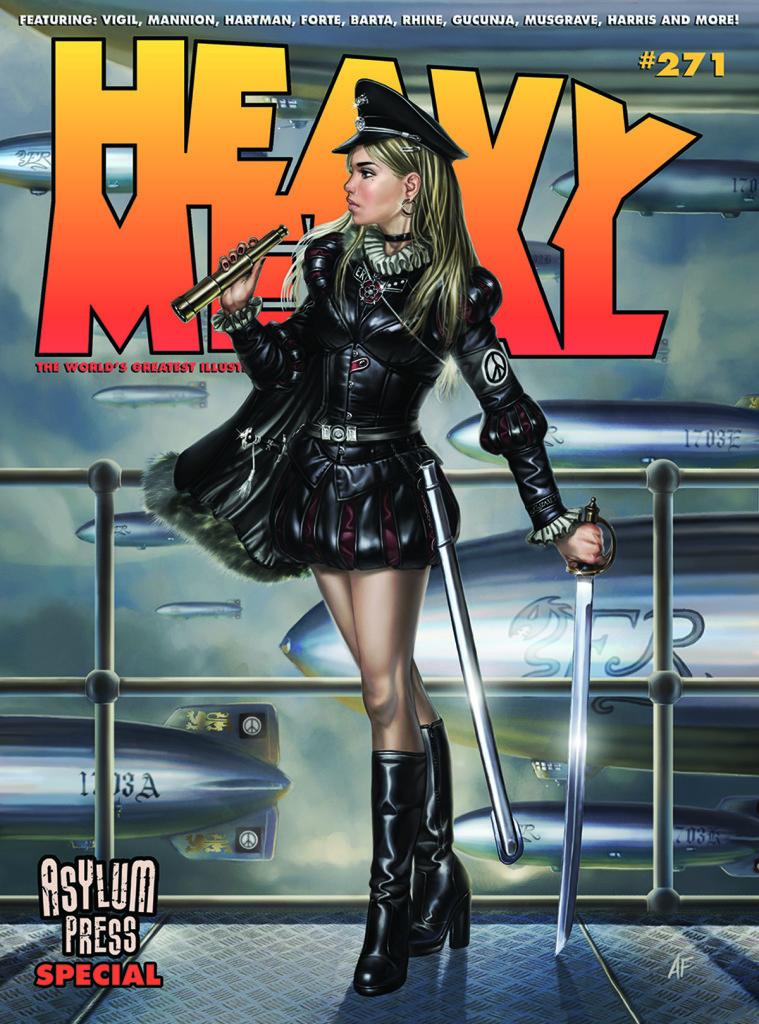 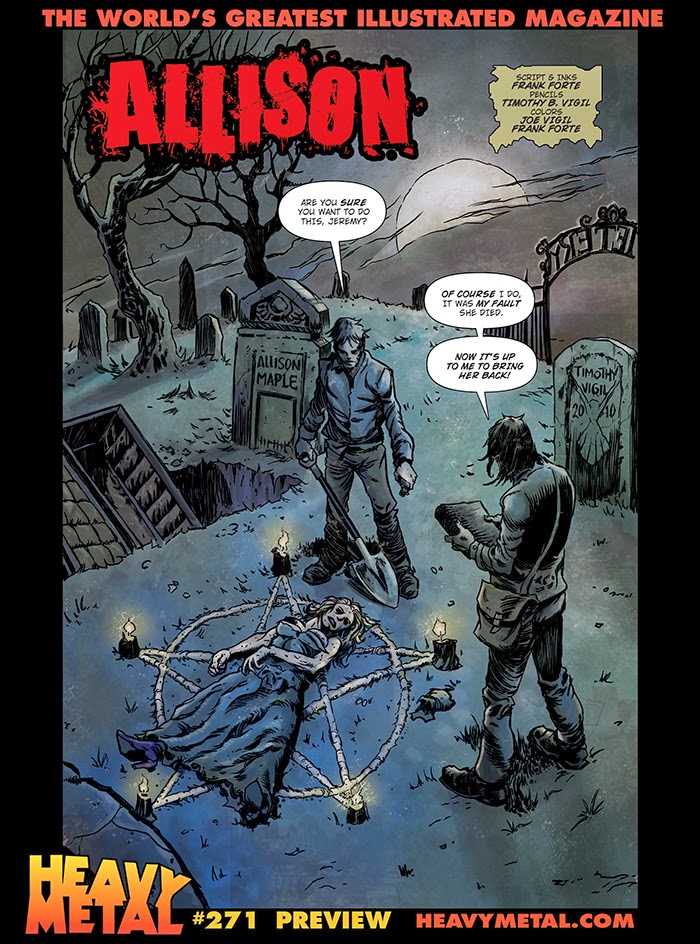 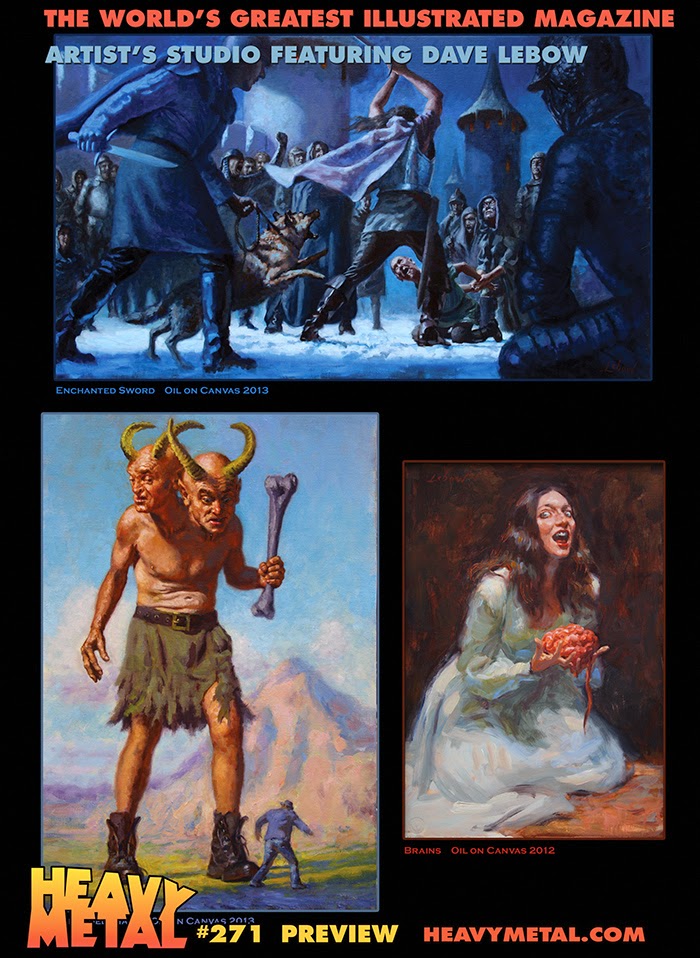 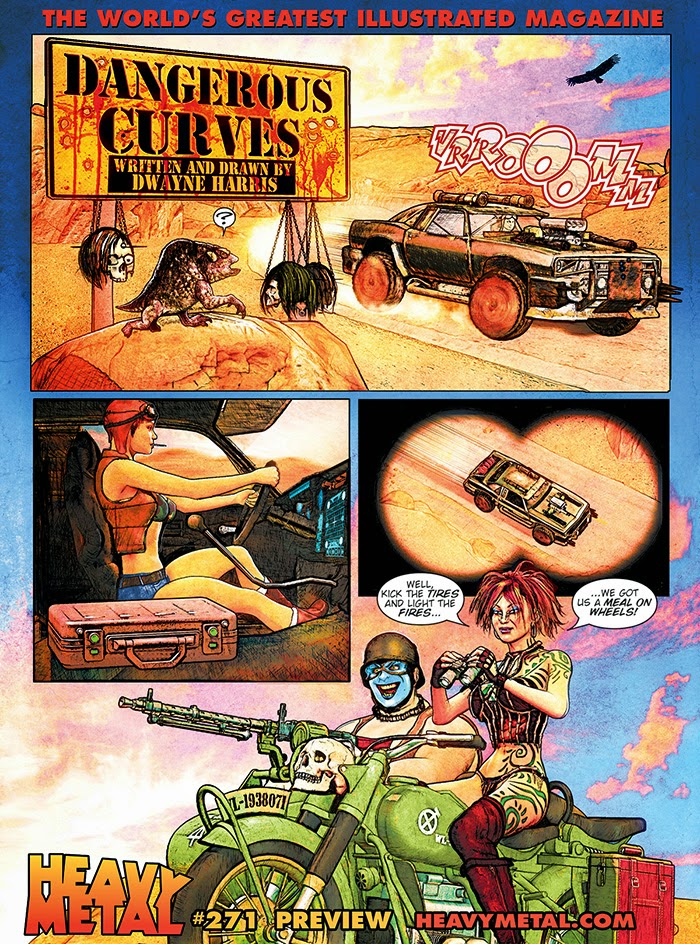 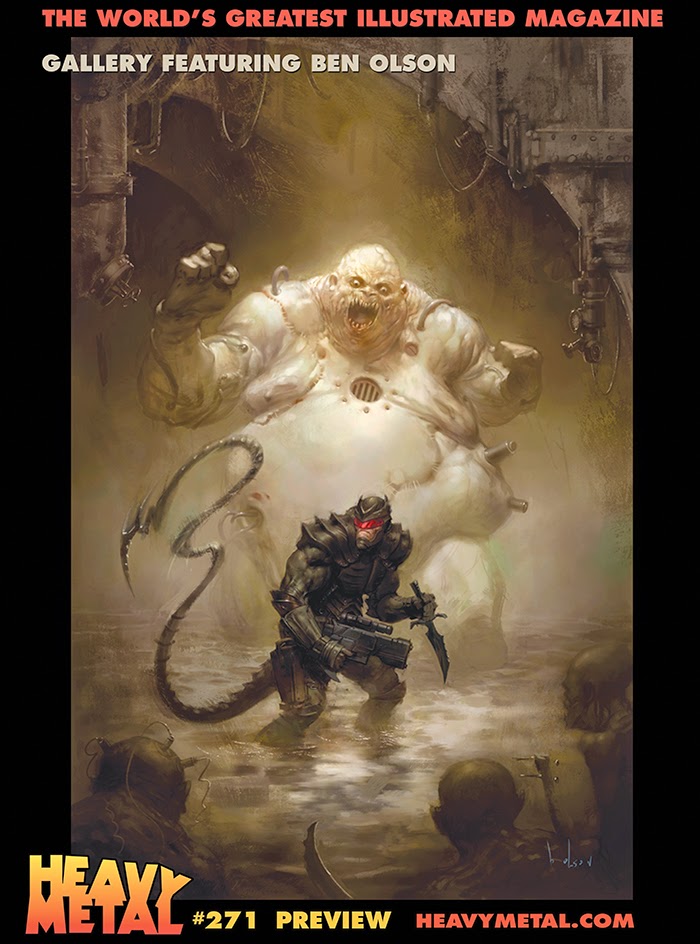 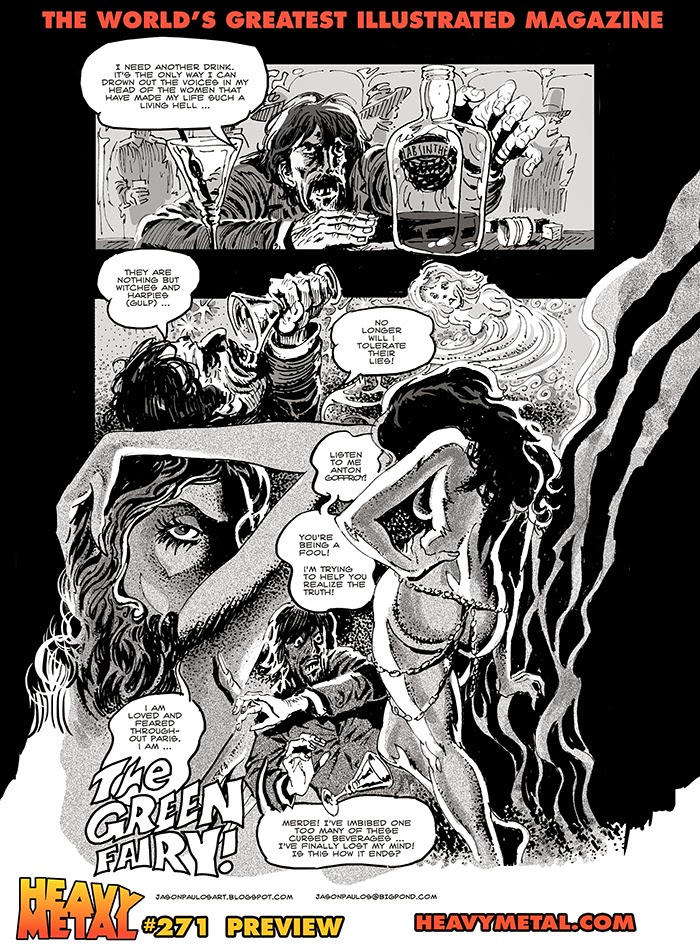 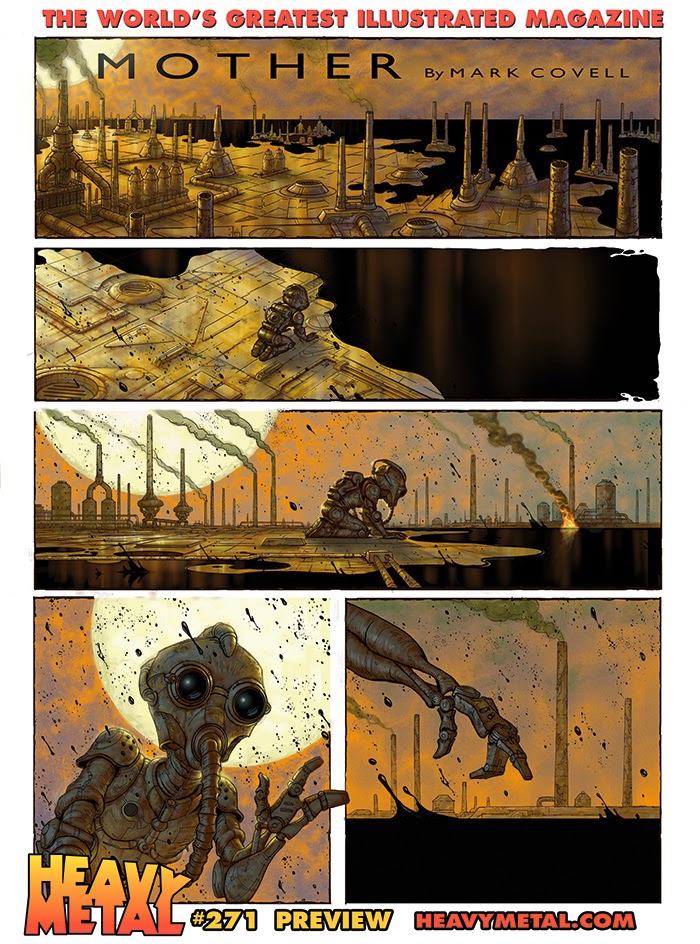 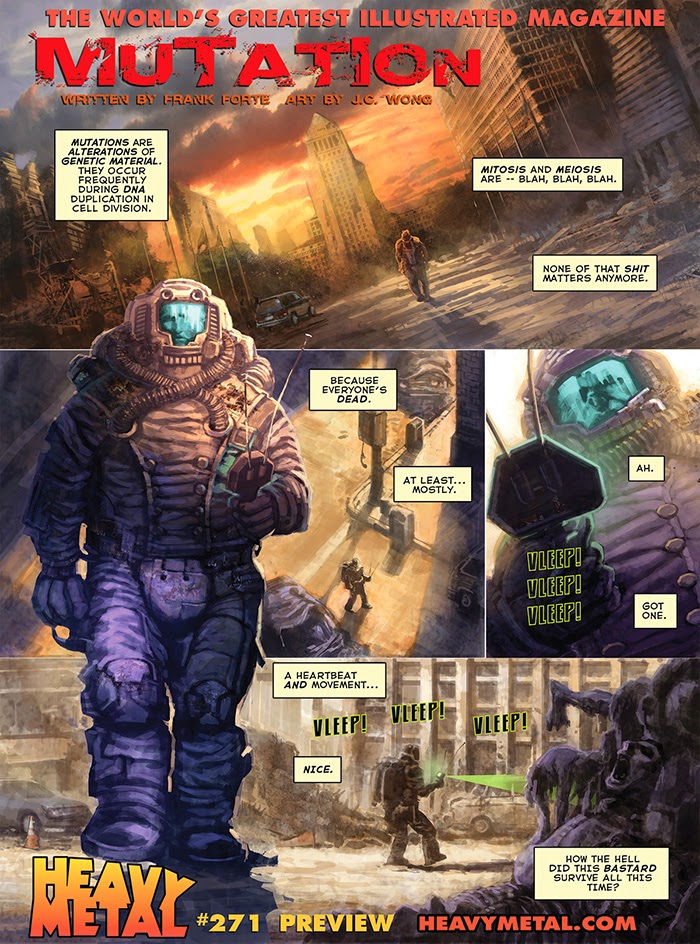 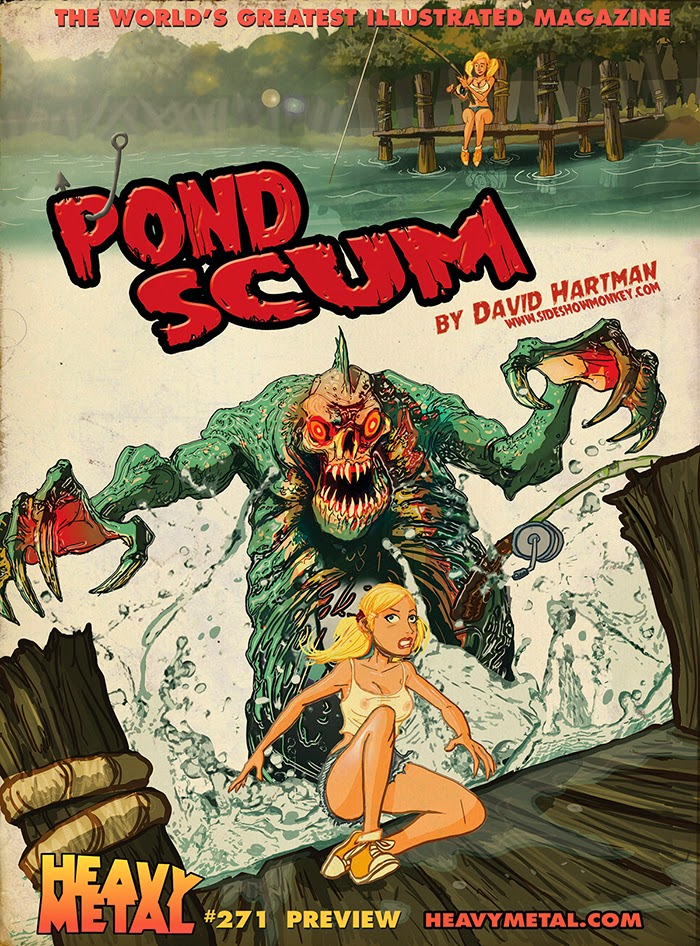 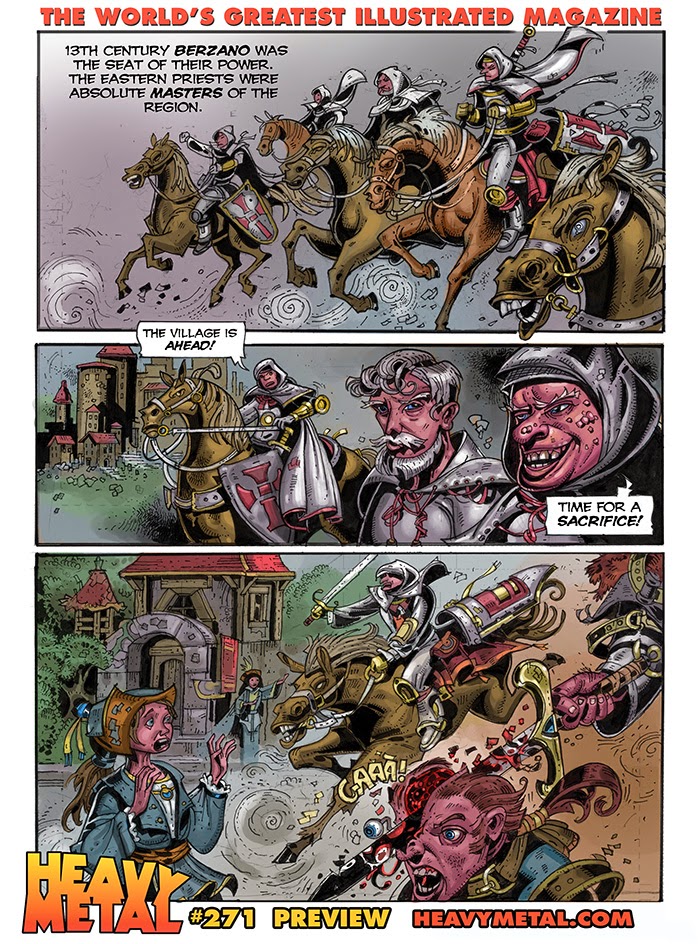 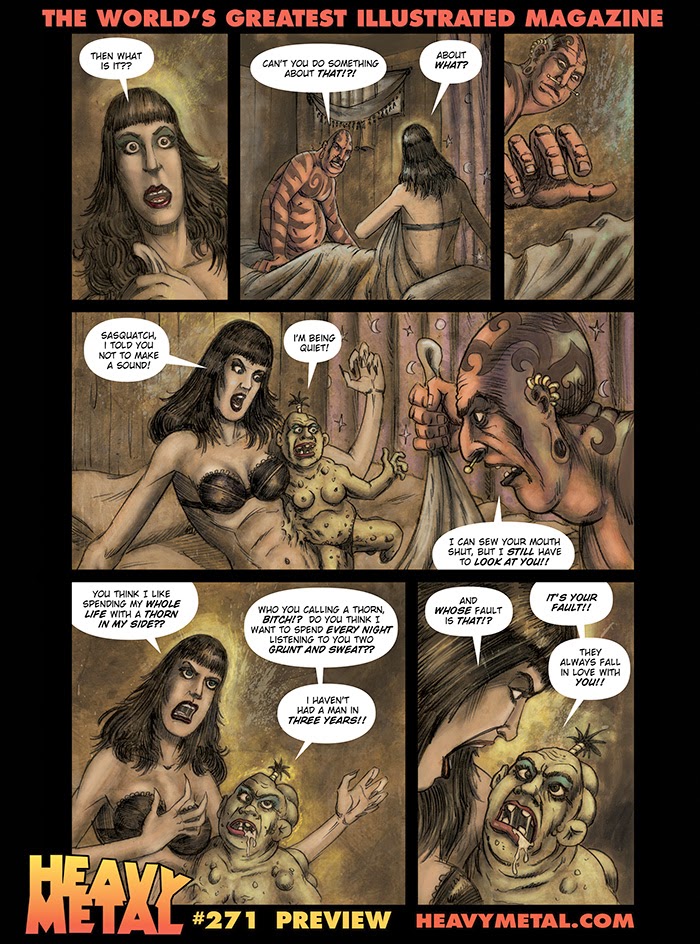 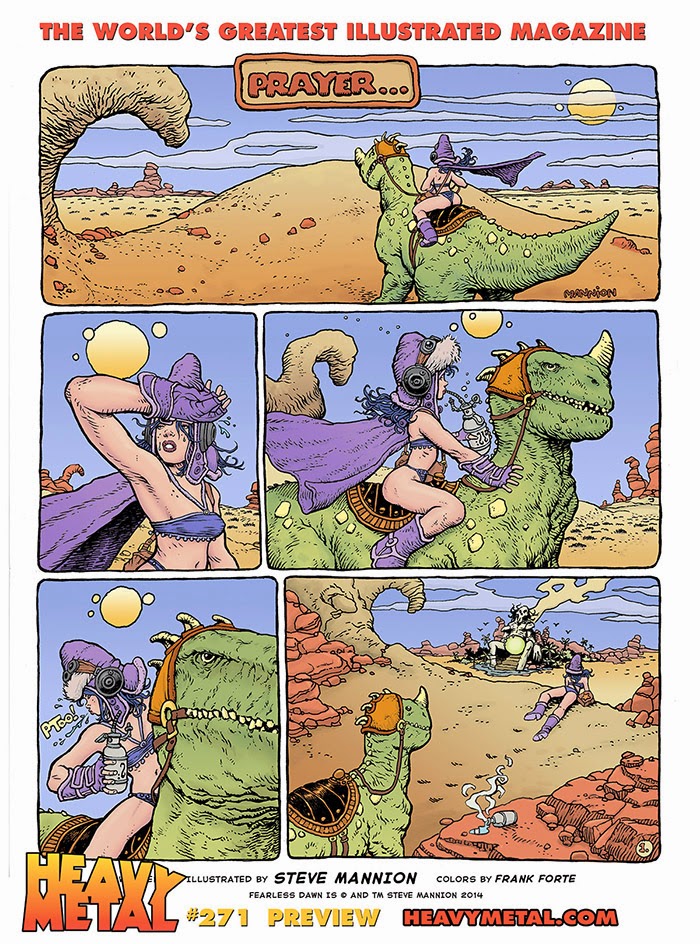 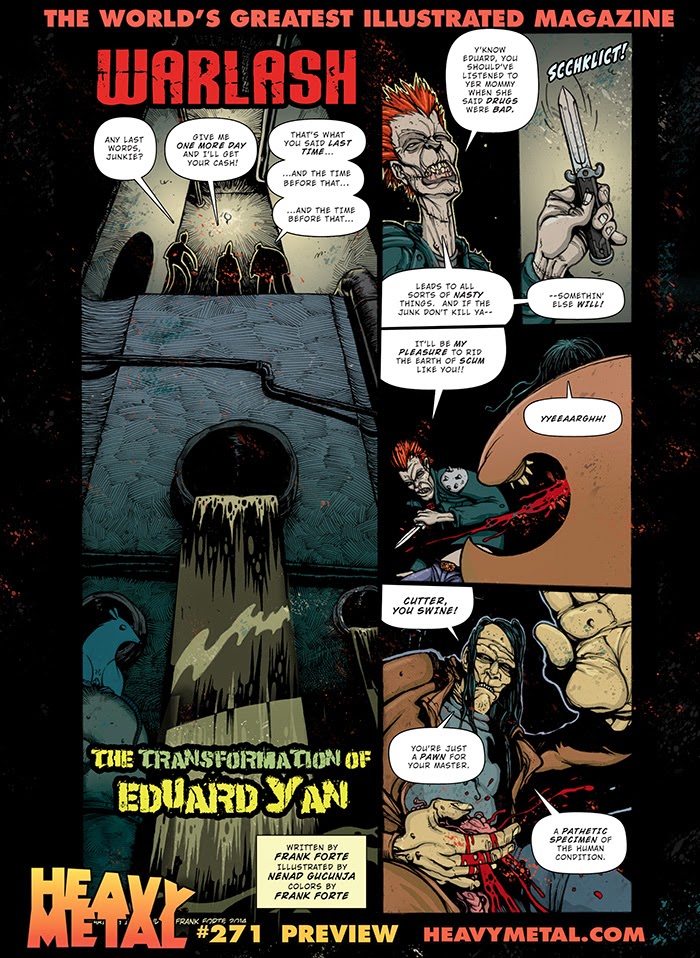