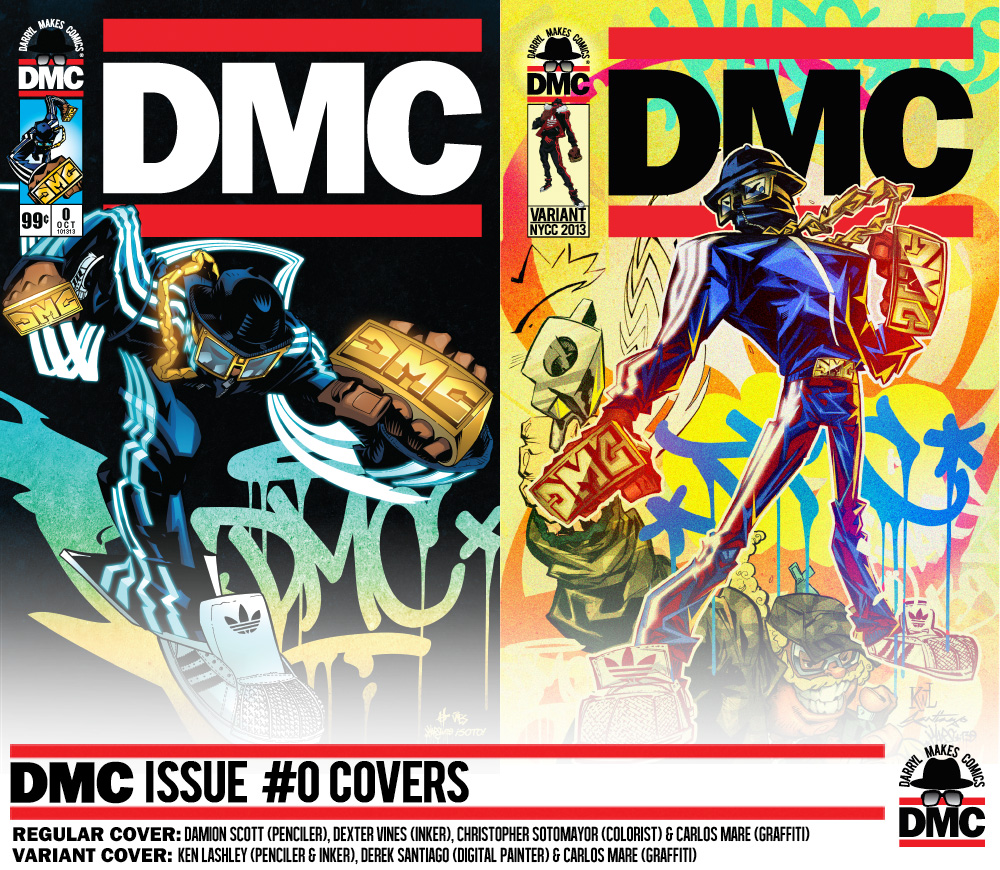 Darryl “DMC” McDaniels, a founding member of iconic rap group, RUN DMC is embarking on his next project that is aiming to change the face of pop culture forever! Combining two of his first loves, hip hop culture and comic books DMC is ready to throw his hat into the ring as an independent publisher with an original comic set to be released Fall 2013.

Already a hero to his millions of fans around the world, DMC’s accomplishments read like a laundry list of musical and cultural accolades: Grammy nominated musician, multiplatinum recording artist, Rock-N-Roll Hall of Fame inductee and rap/rock pioneer who’s influenced music since the first time he’s ever touched a mic. Adding to his long lists of firsts, DMC is teaming up with some prominent fixtures in the comic book and music world to craft the first 100% authentic, unapologetic, indie, hip hop comic book. This latest endeavor is helmed by Art Director Edgardo Miranda-Rodriguez and Music Executive Riggs Morales.

The first book published will be the graphic novel, DMC, under the imprint, Darryl Makes Comics. Darryl “DMC” McDaniels is the Publisher, Edgardo Miranda-Rodriguez is the Editor in Chief and Riggs Morales is the Senior Editor. The graphic novel will feature some of the comic book industry’s finest talent. The writer on this book is Ronald Wimberly, writer of the critically acclaimed “Prince of Cats” on Vertigo/DC. There will also be a limited collector’s edition oversized graphic novel (11″ x 17″) featuring cover art by legendary Marvel artist, Sal Buscema (Avengers, Spider-Man, Incredible Hulk) and style master graffiti legend Carlos Mare (Style Wars).

Set in hip-hop’s revolutionary era of the 80’s, the first comic features DMC as a superhero fighting for justice in an alternate universe. Wild Style-inspired graffiti covers every surface of this world as the true grit of pre-Giuliani New York is captured within the pages of the graphic novel.

Edgardo Miranda-Rodriguez is a New York based Art Director extraordinaire who owns and operates two very successful art studios, Somos Arte and Studio Edgardo. An avid comic collector, Edgardo translated his love for comic book art by curating an exhibit for Marvel’s Chief Creative Officer, Joe Quesada’s “Santerians,” a project highlighting comic’s first ever all-Latino super team. Riggs Morales, a music veteran, started as a as a writer for publications such as The Source, Vibe, XXL and The Fader and was crucial in introducing the world to another rap supernova, Eminem. He later became A&R executive at Shady Records, forging the superstar careers of Slaughterhouse and 50 Cent. Riggs Morales is now Vice President of A&R and Artist Development at Atlantic Records.

Edgardo and Riggs first joined forces to create the landmark exhibit “Marvelous Color” which highlighted Marvel Comics’ African American super heroes during the company’s 70th Anniversary. The exhibition was sponsored by Shady Records and Def Jam, which showcased the art of Wu-Tang’s Wu-Massacre by renowned X-Men Artist, Chris Bachalo. After the successful exhibit they bonded with DMC over a love of comic books and art. Inspired by DMC’s vision, the three immediately decided to pursue DMC’s dream of becoming a comic book publisher with Darryl Makes Comics.